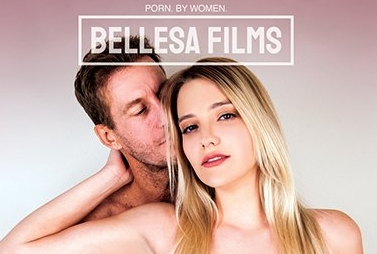 MONTREAL, Quebec (Feb. 17, 2021) – Award-winning starlet Kenna James headlines “Holding Out & Giving In 3,” the newest installment of the popular series from Bellesa Films, the studio created by women for women. Distributed exclusively by Mile High Media, the movie is now available on VOD.

“We’re excited to bring the third chapter of ‘Holding Out & Giving In,” featuring our lovely cover girl Kenna James,” St. James said. “She brings her trademark sensuality and infectious energy to the new release that is filled with amazing performances from our stunning cast.”

“Holding Out & Giving In 3” begins when Kenna comes into Ryan’s office at the end of the day and she finds her boss tearing into someone. The comely blonde soon shifts their power dynamic to make a better and more pleasurable connection. Next, while on vacation, Jane and Logan have to spend a couple nights at his parents’ house. Jane encourages him to enjoy his time off by focusing on her instead.

In scene 3, Silvia and Nathan find themselves at different points in their lives, but after some initial tension, they rediscover their sensual connection. Next, when the self-assured and boldly flirtatious Keira calls Dante out on his awkwardness with her, he’s not sure how to handle it since she’s his friend’s little sister. But when they both give in to temptation, they discover their mutual attraction.