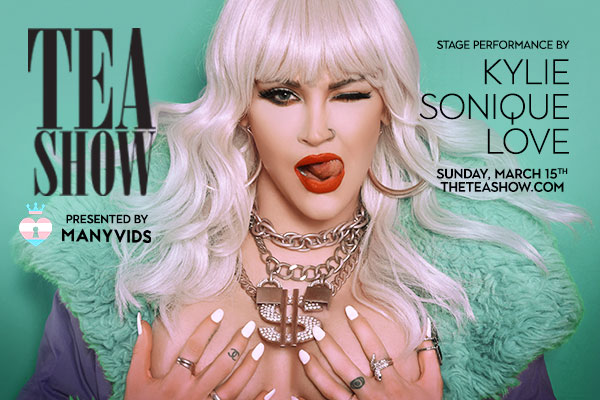 “I am beyond excited to have my sister Kylie Sonique Love performing at the 2020 TEA Show!” says TEA Mistress of Ceremonies, Domino Presley. “We go WAY back, like, roommates pre-transition back! We lived together in Atlanta when she auditioned for RuPaul’s Drag Race and now here we are a decade later sharing a (massive) stage in Los Angeles for a red carpet event. Kylie was THE FIRST contestant on RPDR to come out as Trans and recently had the luxury of singing live for Beyoncé. This will be her second year entertaining the TEAs and first year singing live.”

Kylie Sonique Love, also known as Sonique, is a popular performer and entertainer, best known for her role in season two of Rupaul’s Drag Race. She was also the first contestant on the show to come out as transgender. Follow Sonique on Twitter at @xoSonique.

The Transgender Erotica Awards (the TEAs) are a two-day event held in Hollywood, CA, during the weekend of March 13-15, 2020. The event is the only of its kind and celebrates the accomplishments of the trans adult industry. More details about the event will be released in the months to come. Visit their official website at theTEAShow.com. The 2020 sponsorship packages are now posted here: https://theteashow.com/sponsors.