On January 11th 2013, no talent ass-clown Lady Gaga walked on stage in Vancouver, British Columbia with a controversial chip on her “fashionable” shoulder. She was sporting a rather (cool?) bra constructed of machine guns standing proudly erect from her near perfect natural tits. 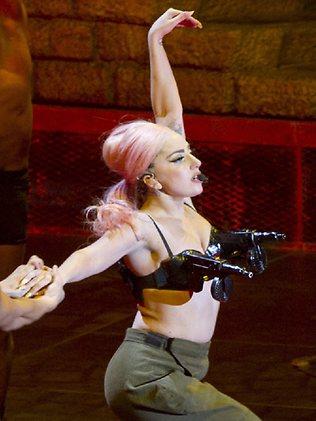 With 26 people dead in Newtown CT as a result of the Sandy Hook Elementary shooting in December 2012, it’s natural she’d take a lot of flack from critics about her wardrobe choice. Bear in mind though, she’s pushed many wardrobe boundaries before.

Many of Gaga’s fans aka “Little Monsters” (as she calls them) were quick to point out that she has in fact sported this same bra (or one very similar) previous to this recent tragedy, both on stage and in one of her shitty music videos. Also, it was seen on the cover of ROLLING STONE MAGAZINE in June of 2010! Basically, it’s not like she kept this little number in the back of her closet just waiting to bust it out at the most inconvenient of times.

So, what’s the verdict? Is Lady Gaga an asshole for sticking with her costume choices in spite of a tragic shooting? Was it really a slap in the face to those affected by the incident? It’s not like she performed IN Newtown, and I doubt parents of those affected listen or pay any attention to this pop star. I wonder what she’ll come up with next…

DON’T FORGET TO VISIT OUR SEXY PANTIES CATEGORY ON PORN.COM!