A Night with Lucky Starr at the AVN Awards!

Pictures and story by Lucky Starr of clubluckystar.com

Today was one of those days where you wake up and say, “What the hell happened last night??” Yesterday, I wanted to be very prepared for the evening, so I started out with a massage from the Grand Spa at the MGM, and on a spur of the moment, decided to go to the salon and have my hair and makeup done.  I literally plopped down in the makeup chair and said, “Make me look like a porn star!”  It was pricey, but well worth it. I would be wearing a beaded and sequined Aidan Maddox cocktail dress with a gold Kate Spade clutch.  I was feeling pretty fabulous.

I got to the Hard Rock Hotel very early because I had to make it through the red carpet quickly (I know, there’s no such thing!), and hurry up and get to The Joint’s dressing rooms to run over the opening number a few times.  I managed to pull it off somehow. Never in my life have I seen brighter lights and more photographers. I felt like my smile was frozen because I was so nervous. The energy in the room was unbelievable and I was surrounded by the adult industry’s finest talent.

I hurried up to the dressing rooms to get in costume and be spray-painted gold.  All of us were so excited to be doing the opening number.  Belladonna would be doing her aerial silk routine, and I was part of the Belladonna Dancers which were Lea Lexis, Brandy Aniston, Aiden Ashley, and myself.  We were so nervous and very excited!! Dave Navarro showed up and interviewed Belladonna.  The energy from the crowd was unbelievable!  Ok, we missed a small section of choreography at the end, but still managed to pull it off with eye contact and working off each other.  Belladonna was amazing, and I thanked her for having me be part of this number.  She really is a sweetheart.  After it was over, we were so pumped from being onstage that we were so ready to party!

Ok, yes the awards are long and boring.  The technical difficulties were insane!!!!  Many of my friends complained they couldn’t get tickets.  I’m a strong supporter of my friends so I stayed the entire show.  I was able to get on stage and lend my support when The Rocki Whore Picture Show won Best Parody-Comedy.  That was great!  I’d love to do a movie like that again soon, it was definitely the biggest highlight of my career thus far.  I was nominated for Best Group Sex Scene for this, but unfortunately we didn’t win that one.

After a long, long, LONG awards ceremony, it was finally over and I was ready to go party hopping with my buddies Payton Leigh and Kora Peters.  The first party was at “The Real World” Suite.  I saw a few friends, but it was so smokey that I could barely breathe.  The next party was better because more of my friends were there and it was smoke-free.  I sat and talked with friends, and hung out a long time with Hustler parody producer/hair salon owner, Scott David (nothing kinky, just “getting to know you” type of stuff).  Before I knew it, I was getting a couch dance from a Korean-American stripper from New York, while her boyfriend watched. My buddies were getting an eyeful!!

So this morning I wake up in my suite.  I’m sure something was slipped into the bottled water offered to me, because when I woke up there were towels everywhere, and blood on one hand towel because apparently I cut my upper lip somehow.  There were a pair of earrings on the side table that were not mine!  I don’t know what happened last night, but I hope I had fun.  I’m glad I’m staying an extra day, because I need to recover from last night.  Tomorrow night, straight from Vegas, I’m off to Pittsburgh, then Cleveland until the beginning of February because my life never stops.

Last night without a doubt was one of the amazing nights of my adult career thus far. I was able to be part of an amazing event, and party like a rock star.   I truly am the “Luckiest” woman in the world!!

MORE Pics from Lucky below and more pics to come later…. 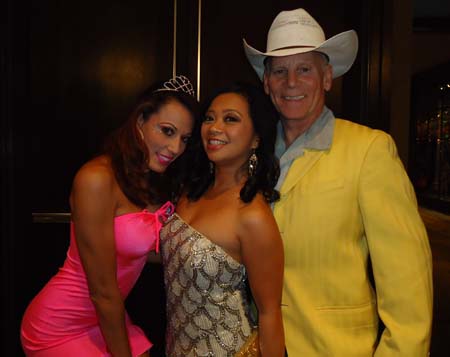 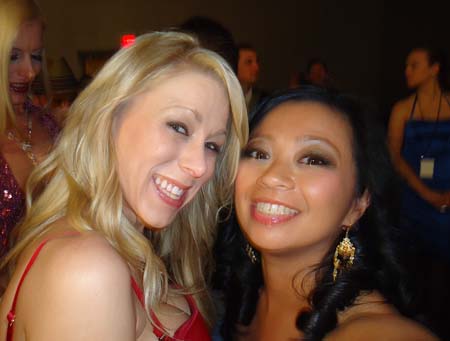 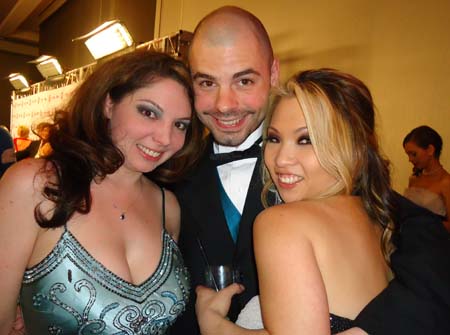