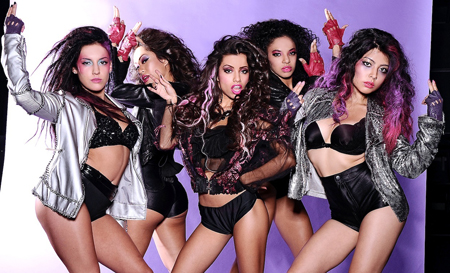 Latin Pop Sensation Lupe Fuentes Smashes YouTube With Debut Video
“We Are The Party” With Over 20 Million Views!

Ex-Adult Entertainment Star Premieres New Girl Group The Ex-Girlfriends;
“We Are The Party” #6 on the YouTube Weekly 100 Music Chart & #4 on the Daily 100 Music Chart
(New York, NY – November 28, 2012) – Haven’t you heard? Lupe Fuentes is the party! The Latina beauty’s hot new pop/dance single “We Are The Party” has over 20 million views on YouTube, is #6 on the YouTube 100 Weekly Music Chart alongside the likes of PSY, Rihanna, Justin Bieber and Taylor Swift, and is #4 on the Daily 100 Music Chart, beating out the likes of One Direction, Carly Rae Jepsen and Maroon 5.
The 4’9” star affectionately known as “Little Lupe” has turned her illustrious career as an adult entertainment star into a budding career as a pop superstar. Lupe officially made her debut as the lead-singer of her new girl group The Ex Girlfriends when she premiered their monster single “We Are The Party” on November 7.
Besides Fuentes, The Ex-Girlfriends is a group of exotic, talented beauties. Smash, is German-Native American, Baby J is Japanese and Brazilian, Dee-Love is black and French, and Tee-Money is Filipina. All have worked as professional dancers and choreographers for some of pop music’s biggest names such as Justin Bieber, Shakira, Christina Aguilera, Katy Perry, Maroon 5, Tiësto, Nelly Furtado and N.E.R.D. “I find my strength in myself and my girls,” says Fuentes. “We are vivacious, sexy and empowered women who value friendship and are always there for one another!”

Overcoming a past of abuse and poverty, Lupe fell into the adult industry as a way to provide for her family. Utilizing her business savvy, her career skyrocketed and she quickly became the “it girl” of the other Hollywood, appearing as a regular on the Howard Stern Show, winning dozens of awards and appearing in a multitude of magazines. Never ashamed of her past but rather finding her passion and doing everything in her power to bring it to fruition, Lupe is excited to transmute her fame as the most successful solo internet star in the history of adult entertainment to her new musical career.

With her focus 100% on The Ex-Girlfriends and the massive response to “We Are The Party,” next up on Lupe’s list is to continue recording and writing songs in the studio in Los Angeles. The girls are already working with a bevy of amazing producers, and currently have almost a whole album written. “I’m not ashamed of my career as an adult star and I’m determined to use my celebrity to push myself and my girls to another level”, says Lupe. “We are the party baby, and I won’t rest until the world knows it!”


Keep up to date with Lupe & The Ex-Girlfriends:
Website: http://theexgirlfriends.com