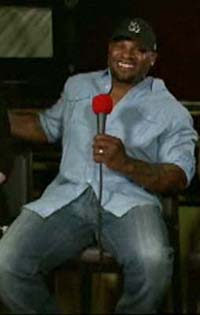 He lost his virginity in his sophomore year in high school to a Mexican girl. As he got older, he became more popular with women. According to surveys, most black women have lost their virginity before the age of 18, while only about half of white women have.

When Mr. Marcus wants to stop himself from ejaculating, he thinks of someone fat. To get aroused, he thinks “the girl doesn’t want to be with me, and I make her. It turns me on, man, for somebody to be resisting me. It gets me so hard. It gets me going.”

His mother, who was on welfare during his youth, now has a clerical job. She knows about his work but as of 1996, had hidden it from his then 13-year old sister.

For a year, Mr. Marcus hid his work from his girlfriend, until she found out by checking his pager messages. She then went to the video store and watched the evidence. She cried for three days but stayed with him. “She’s pregnant now,” he says. “And I’m truly not the one for her.” (Details 9-96)

“Dark as the night, hard as a rock,” writes Adam Film World, “this guy is a hardcore Denzel Washington. Equipped with a huge dick, a gorgeous physique and a low key attitude…”

Luke Ford did quite a bit of writing on Mr. Marcus. Interesting stuff. Of course I don’t know what’s true, what’s not. But gives you some background and what was going on around 2000.  There is talk about bi-sexuality, his relationship with Silvia Saint. I didn’t know that several big companies were going to stop shooting interracial because of obscenity laws.