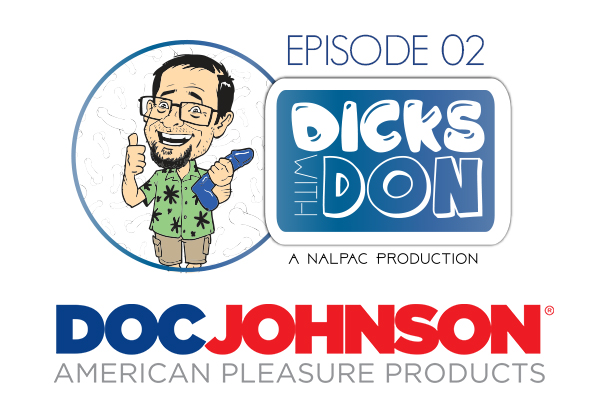 ‘Dicks with Don’ features senior Nalpac buyer, Don Zerilli with his sixteen years of industry experience, breaking down the top items retailers and consumers need to buy and what they should stay away from. The second webisode of ‘Dicks with Don’ features Kristen from Doc Johnson talking about their new additions to ‘The D’ Collection and their wildly popular new line Main Squeeze Girls Of Social Media.

“I was excited to have Kristen from Doc Johnson in to shoot the second episode of ‘Dicks with Don” here in Detroit. There has been a lot of buzz about the Doc Johnson Main Squeeze Girls Of Social Media collection, and this is a great way for everyone to learn a little bit more about the products in a fun and playful way.“ said Don Zerilli, Nalpac senior buyer and star of Dicks with Don.

The second ‘Dicks with Don’ webisode features items from Doc Johnson including the Main Squeeze Girls Of Social Media and the newest addition to The D Collection, Fat D. The Main Squeeze Girls Of Social Media including @viking.barbie, @brittanya187, and @ana.lorde. Wildly popular ‘The D’ by Doc Johnson collection has added some girthy new dildo’s called the ‘Fat D’ available in both six and eight inches in vanilla, caramel, and chocolate. The ‘Fat D’ is available in two types of Doc Johnson materials the soft ULTRASKYN and in the denser FIRMSKYN.

“We are continuing to have a great time with this web series. I was a little nervous after we released the very first episode of “Dicks with Don” but almost immediately I started getting calls from manufacturers, customers, and industry colleagues expressing how much they loved the webisode and concept. We added some fun trivia and fresh graphics to this video for some good laughs” said Amy Lazzara, Nalpac creative director.