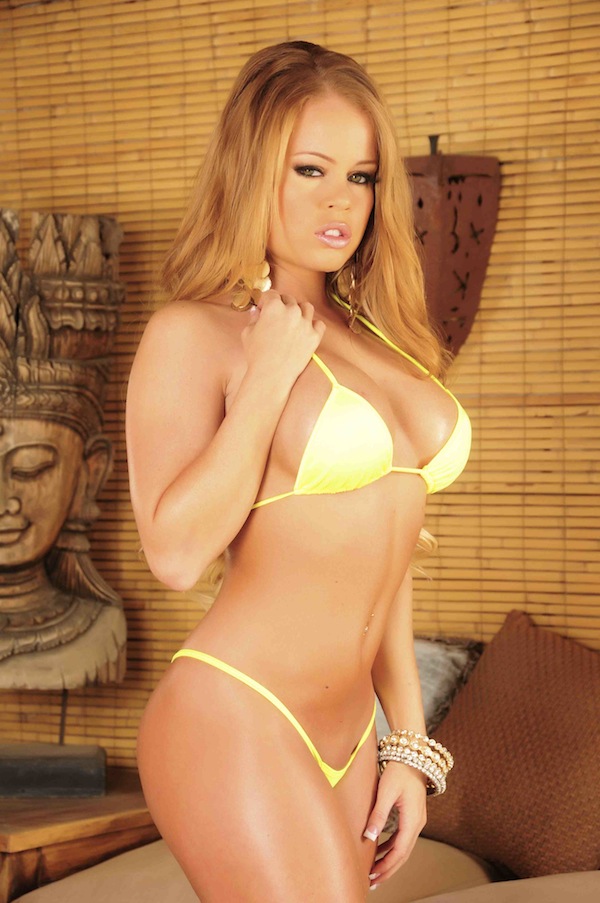 2012 Could Be the Year of Nikki Delano
By Natasha Badanov

When you were growing up, what did you imagine you would be doing for a living?
As a child I grew up in a very strict regimented home, so I foresaw myself as teacher, doctor or lawyer. Parents usually instill white-collar jobs in the minds of their kid at an early age.

I notice you’re feature dancing in Connecticut with Britney Amber next week. What do you like best about feature dancing?
I like to get on stage and perform a choreographed routine and engage the crowd. I love to dance—it’s one of my passions.

What’s you favorite music to dance to when featuring?
I usually put on mixed pop remakes that add zest to the original version of the song.

You’ve become very successful in a short amount of time and made almost 75 movies, what do you think has made you so successful?
I have actually filmed over 100 films and what separates me apart is that I’m Latina, but I’m definitely not your typical Latin woman. I’m blonde, light-skinned and have green eyes. Also I have a muscular build.

What was it like to attend your first AVN Award Show and AEE Tradeshow?
It was lots of fun and it meeting so many fans was great. The tradeshow was insanity but I loved it. It’s like an Exxxotica times 10! The awards show was also a blast and I enjoyed dressing up and walking the red carpet. Hopefully, next year, I’ll receive a nomination or two.

What advice would you give a new girl just entering the industry?
It’s not easy to be a performer and you need to be mentally strong and levelheaded. You will lose friends, your family will frown upon you, peers will turn there back on you and you will definitely encounter some shady people in the business.

Are you going mainstream anytime soon?
Yes, I’m going to be in a mainstream movie called “Hallow Pointe”, which I’m very excited about.

Do people recognize you in the street? If they do, what’s your reaction?
Yes, they have, especially when I’m on vacation in Vegas. They get all hyper and goo-goo-gaga. But I love it, because it makes me feel complete knowing they’re watching my movies.

What’s the craziest thing a fan has ever asked you?
Would you suck my small penis, and then bite it? LOL That’s one of the funniest gestures that I’ve heard.

Best pick-up line ever used on you?
None, I just like a confident man with charisma and charm, that’s a deal stealer.

You played Shakira in a recent parody of the El Gordo Y La Flaca talk show. How did you prepare for that? Did you have to study Spanish for the role?
I’m Latina so I know Spanish, but I also memorized a script. I also hired a choreographer to get Shakira’s moves down pact.

What other events do you have coming up soon?
Exxxotica, feature dance tours, shooting, filming the mainstream movie, etc.

Look in your crystal ball? What do you see in the future for Nikki Delano?
Lots of success and prosperity in anything that I decide to do because I’m hardworking and disciplined.