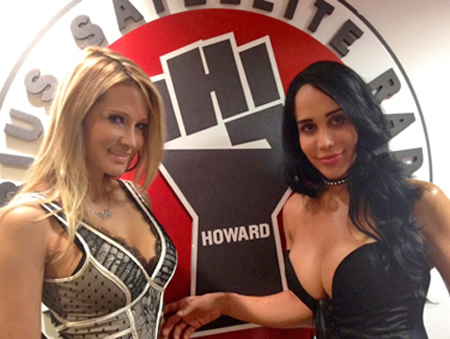 You can see clip of Octomom’s naked Vid here http://www.wicked.com/octomom

Los Angeles, Calif. / New York, New York – (June 26, 2012) – In her recent radio hit New York, Grammy Winner Alicia Keys celebrates the iconic “Big Apple” for being “famous as a place for movie scenes.” Well, the “Capitol of the World” received a double dose of Hollywood style this past week as Nadya Suleman and Wicked Girl™ jessica drake descended upon Manhattan for a promotional blitz that saw them visiting such top-rated programs as The Howard Stern Show and ABC’s The View. The ladies took to the airwaves to promote the June 20th online premiere of Ms. Suleman’s Brad Armstrong-directed self-pleasure film Octomom Home Alone. And the PR juggernaut has continued in LA, with the ladies appearing on HLN’s Dr. Drew. Today will see Nadya joining Ms. drake on her on own Playboy radio show, In BED with jessica drake.

Of the ladies’ time on The Howard Stern Show, jessica enthuses, “Howard Stern was the perfect host – he already knew a lot about me and my career as an emerging sex educator. I gave my first interview on coaching Nadya on set and helped her ride the infamous Sybian. The show generated so much interest that the website kept crashing! My personal highlight of the show was when Howard dubbed me ‘the Vagina Whisperer!’”

Thursday June 21st found the ladies once again in the mainstream media spotlight as they visited the set of ABC’s top-rated talk show The View. “I was initially apprehensive, but meeting the ladies of the show put both Nadya and I at ease,” reveals jessica. “Sherri Shepard and Whoopi Goldberg were so friendly, and Elizabeth Hasselbeck was a very calming presence for Nadya.  As I sat in the front row, I noticed how supportive the audience was, and all of my apprehension melted away as Nadya began one of her best interviews yet. Personally, I am pleased to have been a part of the experience – and meeting Whoopi Goldberg backstage was a moment I’ll never forget!”

The ladies are now back in Los Angeles, where they taped their Dr. Drew segment. “I found Dr. Drew to be a caring and compassionate person,” jessica says of the lively taping. “It’s obvious that he truly cares about Nadya and her family. Nadya handled herself beautifully and it was a great opportunity to dispel some of the myths and misconceptions people have about the adult industry.” Today will see Nadya joining jessica on her own Playboy Radio Show, In BED with jessica drake at 2:00 pm on Sirius 102. A limited number of callers will be able to speak to Ms. Suleman directly by calling (877) 205-9796.

For her part, jessica is happy to speak to Ms. Suleman’s message of self-empowerment. “Being a part of Nadya’s tour to promote Octomom Home Alone was really wonderful. I’m impressed with her growing confidence during interviews, and from The Howard Stern Show to The View, she was very well received and treated with the utmost respect. I think that Brad Armstrong and Nadya both did a great job on this project, and people will be amazed when they see this side of her!”