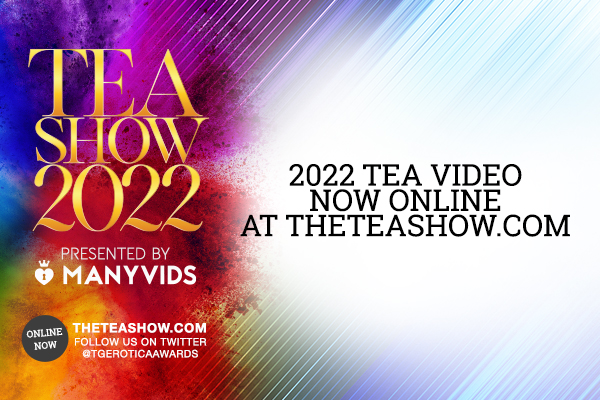 “For those who were unable to attend our event or were just feeling a bit nostalgic, we’re excited to share HD video from the TEAs,” explained TEA Executive Producer, Kristel Penn.

The 2022 Trans Erotica Awards presented by ManyVids was held as a two-day event in Hollywood, CA, back in March 2022. Hosted by Mistress of Ceremonies, Domino Presley, the TEAs exclusively celebrates the achievements of the trans adult industry and its performers. At their most recent event, the TEAs handed out over 30 awards honoring a wide breadth of individuals and companies in the adult industry. Videos can be seen at theTEAShow.com or at TGirls.com.

“2023 marks the official 15-year anniversary of the TEAs,” added Penn. “It’s only June, but I’m already in the early planning stages for next year. I want to make sure we celebrate our 2023 show in a way that honors the rich history of our event and where we’d like to take it in the future.”

Sponsorship inquiries can be directed to [email protected].

The Trans Erotica Awards (TEAs) is an exclusive two-day event that celebrates the accomplishments of the trans adult industry. First conceived as an online event, the TEAs shifted to a live format and have grown exponentially over the last 15 years thanks to the generous support of their sponsors and guests. For more information, visit theTEAShow.com.