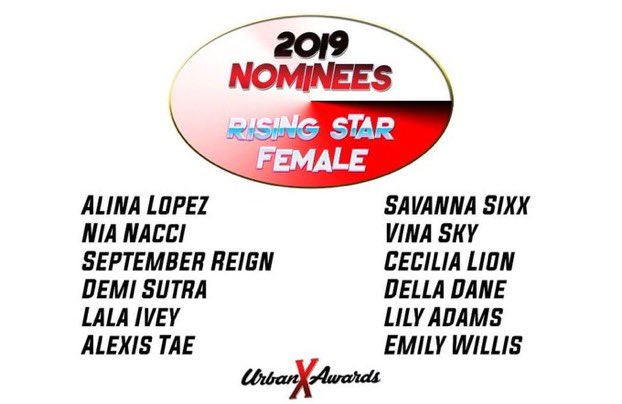 First this has absolutely nothing to do with September Reign as a person but calling her a rising star for 3 years in a row is an insult in my book.. She’s also one of the few African Americans racist Urban X HOF director Axel Braun casts.

Here are the 2019 Nominations For Rising Star:

Gee Urban X,  how high is the Rising Star bar?  She’s been on the rise for 3 years??

When you compare her to Urban X 2010 inductee Alexander Devoe, she’s got 3 times as many scenes in a 3rd if the time..I’m thinking next year she’s in the HOF

Of course Devoe also cashes the Urban X checks, so its only right he’s in the URBAN X  HOF..

On a side note, I’ve created the TRPWL HOF, This years inductees are Peter Warren, and the Geico Lizard. I’ll nominate Lansky next year so I can get that check..

You know who does PR for the Urban X Awards? Ill give you some hints, cocaine, content trade, and wrinkly balls.. Yep, James Bartholet. Who coincidentally also does PR for September:

And upon even more award winning investigation, once again, James Bartholet’s roster seems to be doing very well in the nomination department. Good for him, he must really be a good publicist, probably better then the overrated AVN Publicist Brian Gross. Brian has never got 3/4 of his roster nominations, even worse, Brian wears blue shoes.. Fail

Want an Urban X Nom?  Have James send out on of these badboys to all 8 people on his mailing list:

You can also find links to her webcamming and a regularly updated blog area.

Huntsman also has an exciting new toy deal from 1amdollusa.com that will be unveiled in February

That PR right there will probably land Nickey in the Urban X HOF, and if she’s lucky, some content trade with a future Urban X HOFer..

Oh, did I mention James is also an Urban X 2019 HOF Nominee?  Just goes to show you that the The Urban X Awards Are A “Popular And Legitimate Event”