Here’s what he wrote- 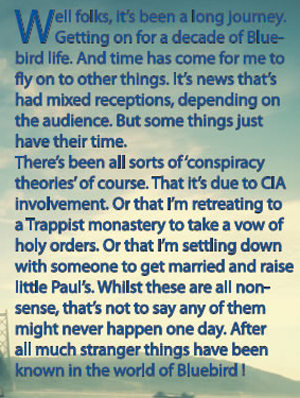 The truth is much simpler. I’ve retired from performing in order to do other things, including of course steering LOADED magazine into a new generation of life as well as building and performing in the mainstream Loaded.tv channel on sky 200, starting later in the year. It was hard work and it was fun. As with everything that involves dedication in live, ive made sacrifices and compromises in order to do the shows. We won the awards, we made the money and we made audiences around the world happy. And the next decade of my life will be in a totally different direction. I’m lucky that i had the opportunity to create Bluebird. And rest assured it’s in good hands. I”m equally lucky to be able to steer into other new ventures, which involve me keeping my clothes on. So, thanks to all who worked, watched and enjoyed. See you in the next life!

NL- Two questions- Did he sell Bluebird to Manwin? And how many people does he owe money too?