NL-I’d buy it, whatever it is, with an amazing ad like this. And the name “Hardcore Alloy Wheels” is good too. Note the brand shown is Mariah ? No idea what SEMA stands for, but with ads like these it must be a good time! 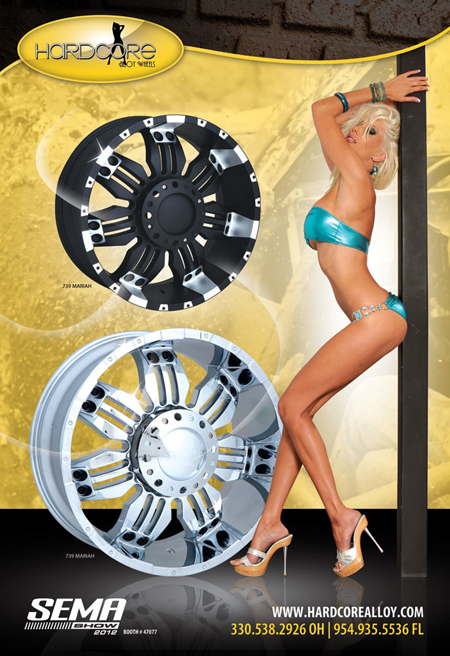 Sweden’s #1 adult star & VNA Girl Puma Swede (http://www.twitter.com/pumaswede & http://www.pumaswede.com) is proud to announce that she is appearing at the SEMA show (http://www.semashow.com/) at the Las Vegas Convention Center, Tuesday, October 29 – Thursday October 31, at the Hardcore Alloy Booth (#47077).  Puma also notes she has even had an off-road wheel rim named after her – http://hardcorealloy.com/.  Puma will be available for pictures, autographs and also will bring copies of her autobiography that was just released in Europe.  The Sema Show is the biggest premier automotive specialty products trade event in the world which last year drew more than 60,000 attendees.

Puma Swede was nominated by AVN for Webstar of the Year (2009) & XBiz Web Babe/Starlet of the Year (2010).  She made sensational headlines on TMZ after performing oral sex on a pilot while he was operating a helicopter, prompting an FAA investigation. Puma has branched into mainstream with a cameo in the comedy The 41-Year-Old Virgin Who Knocked Up Sarah Marshall and Felt Superbad About It. She remains one of the industry’s most sought performers, shooting with the likes of Kink, Wicked, Brazzers, Zero Tolerance, Girlfriends Films & Naughty America.  She also tours the world feature dancing, most recently performing at the world’s largest club in Ibiza in front of over 12,000 people.  She is currently a Fleshlight Girl and part of Vicky Vette’s popular VNA Network (http://www.vnagirls.com) along with stars such as Nikki Benz, Julia Ann and Francesca Le.  Puma’s recently released autobiography  http://bit.ly/SBfO5s has drawn massive publicity in Europe & is expected to be released in English soon.
Puma Swede is quoted as saying: “This is my second year at the SEMA show with HardcoreAlloy and we always have a blast. The SEMA Show is can’t miss fun – hot cars & girls. Not every pornstar can say that they have a rim named after them… stop by and see my ‘rim’, lol!”
Puma Swede will be also appearing at the AEE Convention at the Hard Rock Casino, January 17-19, 2013 at the Hard Rock Casino in Las Vegas at the VNA Girls booth.