So there’s this dude, Billy Gibby, and he has five kids. You may or may not have heard of him, and if you haven’t – his money making scheme clearly isn’t working. You see, in order to feed and clothe his clearly un-thought-out family, he decided to whore his body out to multiple businesses by getting logos and slogans tattooed all over his body (and face)! His wife IS PISSED! In the beginning his rates ranged from $300 up to $1000; …before eventually slipping to a mere $75. Apparently he has a mental illness (bipolar disorder), but that’s beside the point. Ironically, this guy was a mental health counselor and ended up losing his job over this charade! 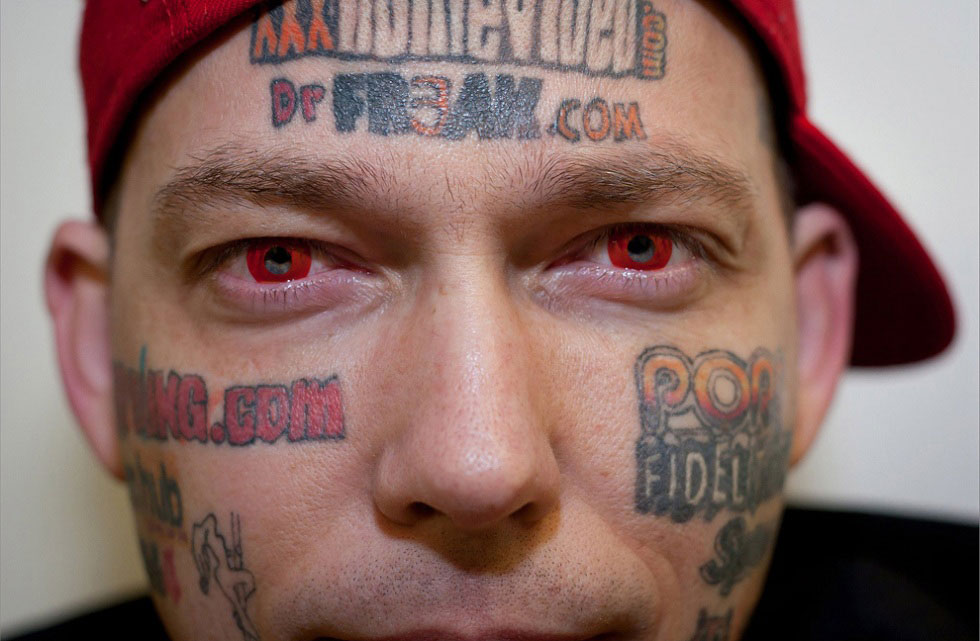 Billy even went so far as to legally change his name to “Hostgator Dotcom ” which is a legit web-hosting company. So now Hostgator is in a pickle – he’s unhappy with the current state of his face, and needs to raise funds to have those terrible tats lasered off his mug! No worries, there’s plenty of other skin estate… Which he’s already addressed! “I really like helping people. That’s what I’d like to do with the money from selling space on my dick: start a business that can give back to the community,” Dotcom said.

Luckily, there’s no reason to damage your dick Mr. Dotcom – it seems cam4.com (one of the first companies to go through with the advert, long ago) has taken responsibility and offered to pay for the laser removal of the tattoos. Since he wasn’t legally bound to a contract, there’s no issue – KUDOS, cam4.com!

XBIZ ARTICLE WHERE SOME OF THIS INFO CAME FROM

ENOUGH OF THIS SHIT! LET’S SEE SOME SERIOUSLY HOT TATTOOED GIRLS IN ACTION:

Two Girls Come Into The Room And See A Man In Need Of Fuck. This video is offered free from porn.com

Angelina Valentine and Sexy Blonde Lick Clit In The Desert. This video is offered free from porn.com