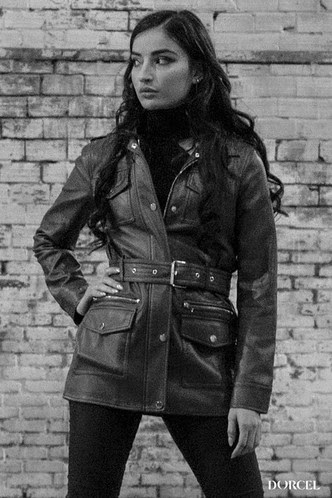 Running two hours and twenty minutes, Revenge is the story of Emily, a successful, high-stakes hustler who shakes down influential men for money or information that can be sold to the highest bidder. When her latest job is ambushed by a previous victim, Emily is given an ultimatum – to make things right, she must perform a dangerous mission that will take her deep into the a world of dark money, data theft, Russian billionaires, and cryptocurrency. She’s told that any failure to comply or complete her task will result in “unfortunate events” befalling her family – specifically, her younger sister, played by newcomer Candie Luciani.

As she formulates a way to hijack millions in crypto from a Russian playboy (longtime Bodilis collaborator Marcello Bravo), Emily reforms her old team of professional masteminds – Cherry Kiss, Clara Mia, Cléa Gaultier, Anissa Kate, and Carollina Cherry. At first reluctant to work together again, even for one last lucrative score, they eventually set aside their differences for the sole purpose of saving Candie…

Revenge is a sprawling heist adventure reminiscent of the classic Hollywood crime capers of yesteryear. Following the same path to success, Bodilis has cast an ensemble featuring several of the hottest names in Europe, with America’s Emily Willis delivering an impeccable performance as the Danny Ocean-esque rogue pulling the strings. It’s a role she plays with awards-worthy conviction amidst the exotic European locations, palatial villas and high production values that distinguish Dorcel from the competition.

From the seductive opening triad featuring Emily, Cherry, and Kristof Cale to an epic conclusion which finds Emily’s band of beauties taking on one very lucky Marcello Bravo. this big-budget production is an ideal introduction to Dorcel’s elegant world of desire and abandon.

“Revenge is arriving to our shores on a wave of high anticipation, given how well it has been performing oveseas,” said Daniel Metcalf, Dorcel’s U.S. Publicist. “Herve Bodilis is never one to shy away from provocation — he’s more likely to sprint towards it — and he has once again raised the bar for himself. He’s set the story of a woman’s psychological and sexual awakening against a complex, globe-trotting storyline that looks back to Tarantino and Soderbergh while looking ahead to things like blockchain and virtual currency, all while delivering seven sex scenes and a career-best acting performance from Emily Willis.”