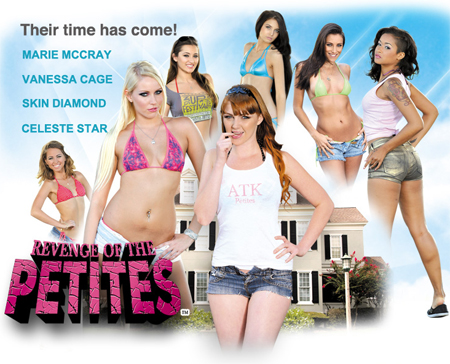 June 5, 2012 — TARZANA, CA — AMKingdom.com is racking up rave reviews from critics and fans with its mega-hit feature, “Revenge of the Petites.” Available exclusively through Exile Distribution, the 3-disc set contains nearly 8 hours of content, including the original feature movie, extended sex scenes, interviews, and a behind-the-scenes documentary.  Retailers and distributors should stock up and cash in on this one-of-a-kind release, as the reviews show “Revenge of the Petites” stacks up as the most highly acclaimed adult film of the year.

In “Revenge of the Petites,” petite and nerdy Marie and her best friend Skin embark on their freshman year of college.  They soon realize college life is not as easy as it seems.  Subjected to the taunts, teasing and practical jokes of the tall and beautiful girls of Theta House, led by the vicious Vanessa, Marie and her friends are left with no choice but to join a sorority for other petite girls.  When one cruel, practical joke by the girls of Theta House goes too far, the petites have enough. With the help of a former member of Theta House, the petites set out to get their revenge in the hilarious and heartfelt coming of age story with an adult twist.

“Revenge of the Petites” is an original feature capturing the essence of the 80’s hysterical coming-of-age comedies.  It is the first feature to successfully merge niche markets like petites, hairy, and exotic with traditional adult elements. Tying all the niches together is an original, feel-good story with heart, as well a huge budget, 23 adult stars, 30 extras, and original music. CraveOnline.com, British GQ, AVN, XBIZ, and other high-profile media outlets raved about the film’s red-carpet theatrical premiere in Los Angeles last month; the DVD release has continued to generate outstanding press.

Named an XBIZ Editor’s Choice, Managing Editor Dan Miller hails the movie as “a funny and thoughtful homage to American coming-of-age comedies such as ‘Revenge of the Nerds,’ ‘Fast Times at Ridgemont High,’ ‘American Pie,’ and even ‘The Graduate’… more than just a sex movie. The film looks great and captures a nice nostalgic vibe that should have viewers digging through their old VHS tapes for a John Hughes fix.”

Gram Ponante of Fleshbot.com writes, “’Revenge of the Petites’ really does evoke innocent fun movies like ‘Revenge of the Nerds’ and ‘Weird Science.’ Not only does it appeal to the demographic that would remember the reference material, but also their elders…. it is also sweet, and you just want to do horrible/wonderful things to Marie McCray all the way through it.”

And Dr. Chauntelle Tibbals, Ph.D., a visiting scholar at the University of Southern California, sums up “Revenge of the Petites” as “one of the most refreshing films I’ve seen in a long time… All the components of this film are woven together in a way that is both refreshing and a nice nod to days of porn-making long past.”