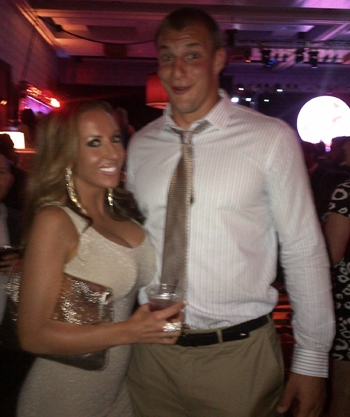 As most of know I am a HUGE Ny Football Giants fan, I’ve been very lucky over the past year to have attended the ESPY Awards in Los Angeles which fell on my birthday July 11th, what a nice present ? I also went to Training camp for my first time this year in Albany Ny and attended 2 games so far this season. 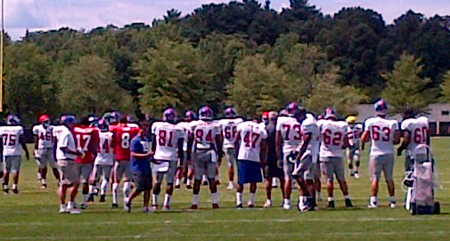 The ESPY Awards was such an amazing experience, I went with 2 of my friends and we had the time of our lives! We sat in row M on the floor and were surrounded by tons of Giants players. I sat next to Prince Amukamara and he was nice enough to let me wear his Superbowl Ring, how awesome was that! The awards show was amazing even though my Giants didn’t win Team of the year and the Miami Heat took it  boooo! ? Halfway during the award show their was a performance by Hip-Hop recording artist NAS which got the entire venue to their feet. After the Award show we had tickets to the VIP after party and that was where all the fun began. We mingled around had a few drinks, I met some more of my Ny Giants and got to try on a few more Superbowl Rings and as a joke my best friend had Rob Gronkowski from the New England Patriots sing me Happy Birthday   Hilarious!! 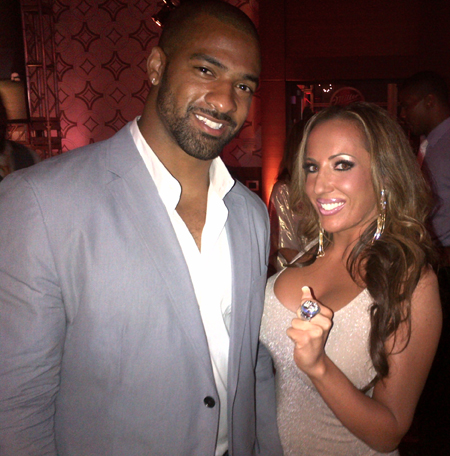 In August I was booked for a Feature dance Appearance at Club Pleasure Island in Newburgh, Ny which is about an hour away from Albany. The Sunday after my Dance appearance was over I loaded up my rental car and headed to Albany. Monday afternoon I made my way to Training camp and was amazed at how many people attended, I would say at least 4,000 fans were there to watch the Superbowl Champs warm up and run threw some drills. I saw the 1st round draft pick rookie David Wilson from Virginia Tech for the first time on the field and he is fast as lightening, maybe faster! It was great hearing the crowd yell “Cruuuuuuuuz” once Victor caught a 10 pass for a Touchdown but no Salsa Dancing happened at Training Camp, such a disappointment ?

My First game I attended this season was Week 4 in Philidelphia against the Eagles. It was my first time going to that stadium and probably my last, I was warned a million times before going there that it was a rough stadium and their fans were crazy ( which I already knew) but I still went. I was rocking my away jersey for my favorite player Ahmad Bradshaw #44. Going into the stadium I heard the usual “Giants Suck” and people singing the Eagles chant and blah blah blah….I’m pretty good at ignoring idiots but once I got into the stadium and in my seats was where it got rough, over the course of the game I had beer thrown on me,  was tripped by 2 guys as I was walking to the bathroom and of course had the usual shit talking going on. The game did not end in the G-men’s favor, we lost the game 19-17 and I left Lincoln Field a sad Giants girl. 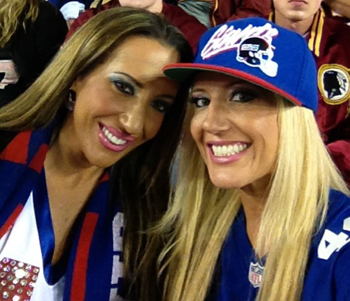 Week 13 we were playing our other Division rival the Washington Redskins and I invited my girlfriend Lisa who knows absolutley zero about football (except for what a touchdown is) hahaha I still love her tho  to go to the game with me under 1 condition- She HAD to wear a Giants jersey which she did ? We loaded up my car and made the road trip 2 hours north to Fedex Field, I was surprised to see a ton of Giants fans, way more than I saw in Philly. I was wearing a custom Ahmad Bradshaw jersey of course and I made Lisa wear my blue one. We walked around the stadium a little and then made our way down to the field to watch my guys warm up. Lisa and I had a blast in the stands during the game, I had to explain every play and made sure she knew when to jump up and cheer. Sadly my second game of the season did not result in getting the win, we lost 17-16. 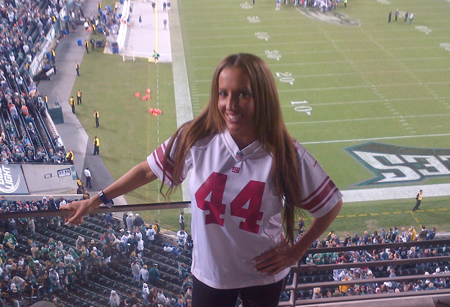 Coming up we have 2 tough road games against the Atlanta Falcons who are 11-2 in the NFC South this Sunday and the Baltimore Ravens who are 9-4 in the AFC North the following week then a home finale against the Eagles who we will hopefully get some payback on from week 4. Giants right now are in the Playoff hunt, we still lead by 1 game in the NFC East and I believe if we come out the gate hard this Sunday against the Falcons we can beat them especially with our strong offensive line going up against Atlanta’s defense which has played poorly the past 2 games- cue the Carolina Panthers replay hahaha 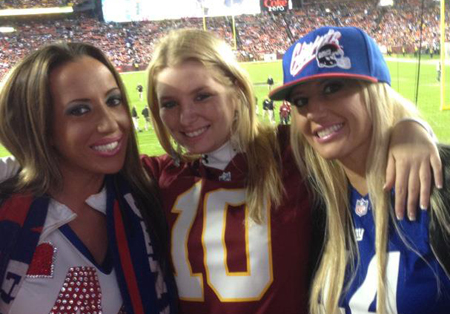 The Ravens have lost 2 straight games and recently fired their offensive coordinator but I feel this game will be a dogfight!!! I’m actually really looking forward to it ?
Can’t forget about the last game of the Season in week 17 at our home against the Eagles who are 4-9 in the NFC East. being that it’s a home game the energy at Met-Life Stadium should be out of control and we can finally get some much deserved payback! But Chatter all you want Giants Haters were still the Champs until you take it from us and we still have a 1 game lead and just dropped 52 points this past Sunday on Drew Brees and his gang with our back up running back!!

Make sure to check out my fansite- www.nygiantsfangirl.com and follow me on twitter for all of my obnoxious tweets every Sunday @richelleryan
xoxoxo
Richelle
www.richelleryanonline.com