NL- Rob, looking forward to our interview soon. You’re a good looking guy, but you look so thin and pasty white, you gotta get a tan and take some vitamins man. You look like you just got out of pris.. oh, never mind. Best of luck with the company. Now if you could get Zupko (one of the all time best directors on the planet) back, Extreme would rise to the top just like “cream” lol 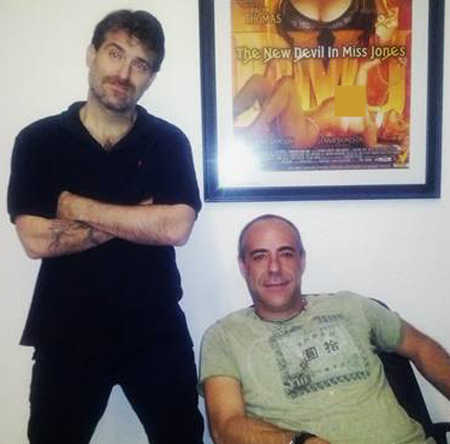 Glendale, CA: Rob Black Productions (www.robblackproductions.com) is proud to announce that they have brought adult industry sales veteran David Peskin aboard as their new National Sales Manager and Head of Online VOD / Marketing.

David Peskin has 15 years of Adult Industry sales experience, much of that time being with Vivid Entertainment as their former National Sales Manager. After parting ways with Vivid two and a half years ago he entered the world of live webcams and launched the extremely successful Fetishchatlive.com, the fetish division of Naked.com. Now he has landed at Rob Black Productions and is ready to bring his knowledge and his skills in both sales and the webcam world to our company.

“I am extremely excited to represent the company on all platforms, including selling the high end comic book parodies from Sinister X and Rob Black Productions.” Dave continued “The level of excitement and energy I am feeling right now is equal to the way I felt back when I was selling The Masseuse or the Kim Kardashian Sex Tape”

Company owner Rob Black welcomed Dave to the team saying “I am excited to have Peskin working alongside me, it feels like the early days of Extreme again, when we were at the pinnacle of our existence. Dave’s salesmanship is the best I have encountered, and over the last 16 years I have met both the good and the really bad. When you have the man who brought Vivid’s sales to prominence, we can know that he will bring that same level of skill to Rob Black Productions as well”

“I am excited to get back on the phones with my distributors and buyers again. I had a couple close encounters. But, I am alive, well and prosperous. I have the honor of working with the top parody director and selling the top product, along with our catalog of over 300 Extreme Associates titles and an exclusive distribution deal for the Dirty D product line. I gotta tell ya, I’m fired up!”

For domestic and foreign sales inquiries: contact Dave Peskin at 818-484-5816 or by email at [email protected]