NL- I always like this guy. He would have been a (slightly crazy) but dynamic leader) 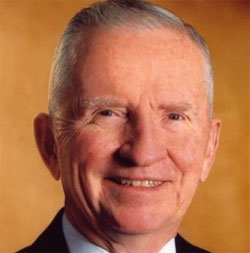 Former presidential contender and billionaire Ross Perot is worried that America is a sitting duck for an unnamed foreign invader. In an interview for his new autobiography, Perot said the nation’s weak economy has left us open for a hostile takeover—and neither presidential candidate is the man to save the country.

Citing an impending fiscal cliff,  Perot warned of disaster. “If we are that weak, just think of who wants to come here first and take us over,” the former CEO of info-tech company Perot Systems told USA Today on Monday.

“The last thing I ever want to see is our country taken over because we’re so financially weak, we can’t do anything,” Perot says.

When asked for his take on the presidential race, Perot added, “Nobody that’s running really talks about it, about what we have to do and why we have to do it. They would prefer not to have it discussed.”

However cryptic he may be, this is the first political reckoning by Perot in years, ever since he withdrew from the political landscape after the fall of his Reform Party in the 2000 election. The man who ran the most successful third-party campaigns in contemporary American politics also expressed optimism about the current tea party activism and its efforts to “wake up” both Washington and the electorate.

Still, he thinks that even the fresh voices in the populist, small-government tea party movement aren’t focusing on the real doomsday issue: the deficit. Comparing the Washington establishment to a bunch of fiscal drunks, Perot is still waiting for America to undergo an intervention, before it finds itself owned by a new global power. “It’s like the guy who’s drinking—sooner or later, he’s got to put a cork on the bottle, right?”