Sasha Grey was in I Melt With You, which played Sundance in January. Below are some of the reviews. The rights to the movie were picked up by Magnolia Pictures and it will be released today direct to dvd. 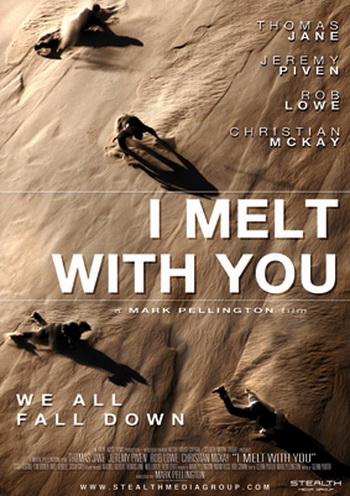 The Wrap’s Jeff Sneider- “Sundance Review: ‘I Melt With You’ Is an Overwrought Mess. Mark Pellington’s “I Melt With You” may be the single biggest disappointment of the Sundance Film Festival. As a big fan of Pellington’s earlier films such as “The Mothman Prophecies” and “Arlington Road,” I probably had greater expectations than most, but regardless of my high hopes, “I Melt With You” is a cinematic calamity from its open frames.”

Chris Bumbray  of joblo.com REVIEW: “I MELT WITH YOU is yet another Sundance entry that’s really going to divide audiences. Heck, of the press audience I saw this with, I’d wager about a quarter of the audience walked out, while another quarter seemed openly contemptuous of the film once the credits rolled. However, I’d also wager that a good 50% of the audience thought the film was incredible, and I’m happy to say I’m one of them.”

Variety’s Robert Koehler-” A weekend romp for four middle-aged buddies devolves into a drug-fueled, suicidal hell in Mark Pellington’s ill-conceived and executed “I Melt With You,” a work of extreme self-indulgence that would benefit from the hand of a firm producer and editor if Magnolia (which acquired theatrical rights at Sundance) is to make it commercially viable. Despite the thesping power of Thomas Jane, Jeremy Piven, Rob Lowe and Christian McKay, pic figures to be a tough play on screens of any size.”

Screen Junkies Fred Topel-“It’s not so much that the film is offensive. It’s just repulsive… The style introduces itself right away with throbbing beats muting out the scenes introducing each character. Text cards make a lot of statements, mostly beginning with “I Am…” By the end of the film, director Mark Pellington is cutting in footage of the Challenger explosion. Forget tasteless. That’s just nonsense.”