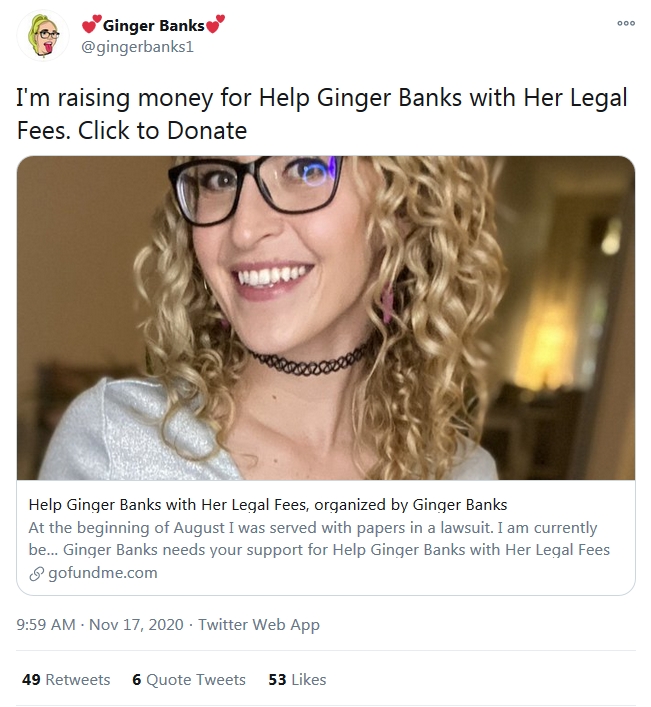 The women who’s accused multiple men and women of rape is now being sued…Ginger, who thinks being raped is someone brushing up against her in a crowded room recently launched a go fund me, which is complete bullshit.  I know a guy who sued someone for libel, won his suit, in less than a year and it cost less than 20k.

I hope she loses everything, even her cute glasses

I have exhausted all of my savings, and now I am being spread thin financially to try and fight this lawsuit. It is hard for me to ask for help when I need it, but I definitely need the help now. I can’t, and don’t want to do this alone anymore. I don’t want to be intimidated into silence through the legal system. I don’t want to let dangerous individuals continue to harm women under the guise of making adult content. I want this industry to be as safe as possible. I intend to fight this to the end so that other people in the industry continue to speak out. I intend to show people that there is a safe and healthy way to partake in this industry.

The money will be going to pay for my lawyers fees, and any extra money will be used for the legal fees of other people in the industry who are involved in lawsuits. I will either start a legal defense fund myself, or donate the remaining amount to a charity that will distribute the funds.

We deserve to do this job in a safe environment, without fear of repercussions if we speak out against the abuse we faced. The sex work community is something I love with all of my heart, and I will continue to fight it for until the day that I die.

Together we can make this industry a safer place for everyone.

Payments I have made to my lawyers so far including another $10,000 to be paid later this week: