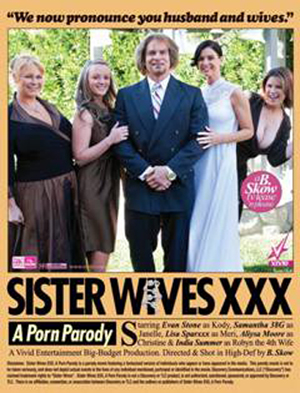 NL- If you ever saw this show on TV, it was crazy. They women really did look like they were walking around in a zombie-like haze. I’m open-minded and want everyone to live and let live, even in this case. But it was just downright WEIRD! And on the show, of course they say there is no sexual  interaction between the women, but I find that hard to believe. The characters Vivid has chosen look just like the women on the show. I’d like to see this just for the “strange” factor. And knowing that B. Skow directed it, chances are it’s a sexy movie… I’ll let you know after I see it. Guys- I have to know, would you want sister wives of your own?

The movie parodies the popular “Sister Wives” reality series now in its third successful season on TLC.  It follows the exploits of Kody, played by Evan Stone, a polygamist living in Utah who has three wives, twelve kids, and a pregnant soon-to-be fourth wife.

“Being a polygamist is definitely not the simple life, but the ever-affable, if somewhat goofy, Kody somehow finds a way to make it look good,” says Skow. “This movie is all about the fantasized version of a modern day Utah-based polygamist family, especially the sexual relationships. It was great fun to shoot and I think the fans are going to love watching it. Plus, the sex is super hot.”