NL- A lot of blood, sweat and tears has gone into the production of this movie. The trailer looks amazing. I have a feeling this movie is going to clean up at the awards this year. Lots of hot muscle men in very realistic fight scenes and beautiful women who want to have sex with them, this is a movie to look forward to seeing. (Hope this isn’t the final boxcover tho, it doesn’t portray the excitement of the movie) 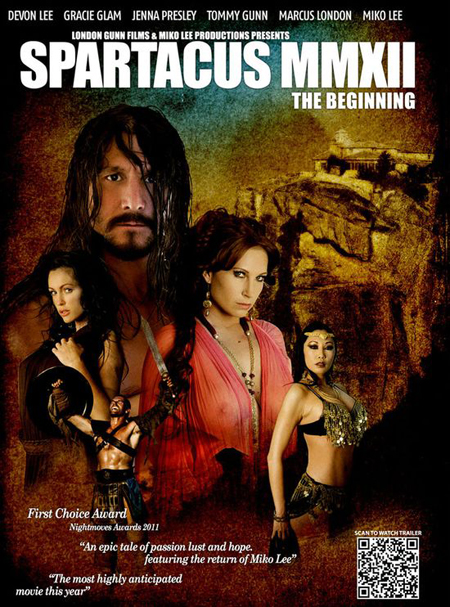 (Hollywood, CA) The wait is finally over. One of this year’s most highly anticipated films in the adult industry debuts this month. The erotic sensation, “Spartacus MMXII” (http://www.spartacusmmxii.com), from London Gunn Films and Miko Lee Productions, will be hitting retailers on September 18th, distributed by Wicked Pictures. To celebrate the launch of “Spartacus MMXII”, the cast and crew behind the film are showing the first ever, industry only private screening on September 13th at the London Gunn Ranch. Members of the adult industry are invited to see “Spartacus MMXII: The Beginning”, a film that is sure to be the start of one of adult’s most successful franchises.

The excitement and anticipation behind the film is accompanied by an all star cast. Critics are not only praising the beautiful camera work and top notch direction, but with a cast of performers like Marcus London, Devon Lee, Tommy Gunn, Tanya Tate, Tony De Sergio, Gracie Glam, India Summer, Miko Lee, Andy San Dimas, Lucas Stone, TJ Cummings, Nacho Vidal and Jenna Presley, “Spartacus MMXII” is sure to excite the fans who are waiting for it’s release.

“The reaction we’ve been getting from our colleagues in the adult industry as well as multiple venues and directors in the mainstream media has been over whelming” says writer/director Marcus London. “This was shot independently, without the help of a large studio. I’m so proud that a small group of performers were able to create something so spectacular through dedication and perseverance. And the screening will be just as spectacular as the film. We’ll be watching the on a giant screen on the same set where we filmed. The ranch will be set up as an ode to the old Roman Empire with tiki torches for a rustic feel. We’re going to make the screening as unique and grand as the Spartacus movie itself. ”

And London Gunn Films and Miko Lee Productions are allowing 2 lucky fans the chance to attend an “industry only” screening of the epic film. True fans of the Spartacus legend must give the correct answers to three questions:

1) Where was Spartacus originally from?
2) Spartacus’ army swelled to a maximum of how many slaves?
3) What year did Spartacus escape from Ludis Batiatus?

Fans who wish to enter the raffle for a pair of tickets to the “Spartacus MMXII” screening must email their answers plus their name and contact inofrmation to Marcus London at [email protected] Please put “Spartacus Screening Questions” in the subject line of the email. The closing date for entries is Midnight on Monday, September 10th. The lucky winner will be announced shortly after.

Members of the press and those in the industry who wish to attend the premiere must RSVP to Marcus London at [email protected] Your VIP invitation will be emailed to you which will ensure your name on the guest list. Casual dress is encouraged and attendees should be aware that the event, which will be held at the same ranch where the film was shot, will be outside and high heels for ladies is discouraged.

For more information, to view other trailers and see behind the scenes pictures of “Spartacus MMXII”, please visit the official website: www.spartacusmmxii.com or the Spartacus Blog Page: www.spartacusxxx.blogspot.com