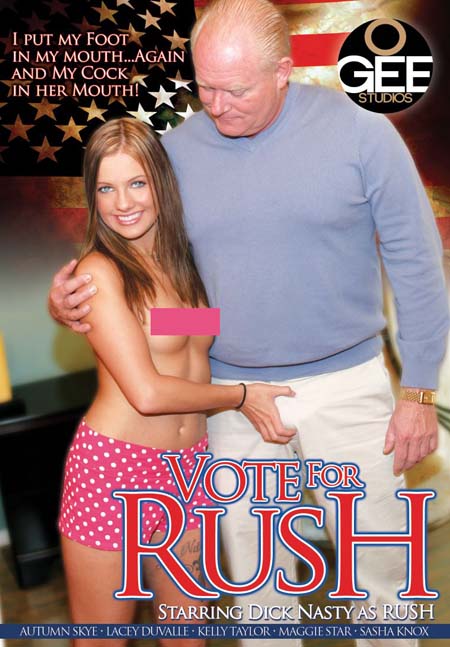 Dick, I’d like to do a quickie email interview if you are so inclined. Pls send me an email Cindi at Lukeisback dot com

(LOS ANGELES, Calif. — April 19th, 2012)  With the rise in fiery political rhetoric this election season, OGEE Studios is proudly reminding the American people that the important issues should be penetrated deeply, and from both sides.  The company’s latest title, ‘Vote for Rush’ follows the moral and ethical dilemmas faced by a certain radio personality after his show is off the air.
Watch out, because everyone’s favorite right-wing ‘Blowhard’ is about to get ‘blown hard!’ Some of the many temptations he encounters throughout his day include hot young vixens such as Autumn Sky as Sandrah, and other ‘slutty’ co-eds who aren’t afraid to say they take birth control like Lacey DuValle, Sasha Knox, and Maggie Star. The movie also features Kelly Taylor as “Oxy” the chalky pixie he’s not too shy to pulverize and enjoy.
Dick Nasty inhabits the role of Rush, the cocky talk-show host who knows what’s ‘Right’ for everyone. ‘Vote for Rush’ will have viewers and advertisers ‘pulling out’ all across America. The video ships across the nation on May 16th, 2012.
Each DVD features bonus photo galleries, pop shot reels, and attractive “jerk-worthy” trailers.
“I am extremely proud of this movie” said OGEE Studios head Mike Kulich. “OGEE is a young company but in our short time we have proven ourselves time and time again. With the release of ‘Vote For Rush,’ I am confident that the response to this film will solidify us as an industry leader.”
New adult production company OGEE Studios produces high-quality themed and niche content with playful storylines. OGEE Studios is a project resulting from the collaboration of Monarchy Distribution and Exile Distribution.