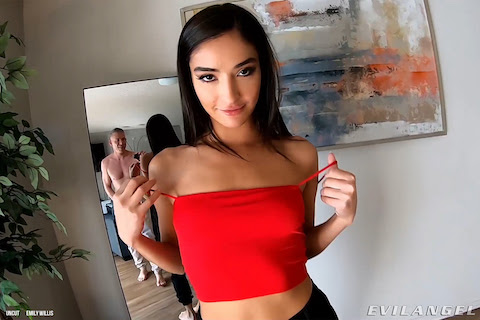 LOS ANGELES, February 24, 2021 — AVN recognized “Emily Willis: Car BJ & POV Fucking!” as the Best POV Scene of 2021, and its charm was a factor in the publication naming Ms. Willis porn’s Female Performer Of The Year. With the current release of director/star Mick Blue’s “UNCUT” on DVD and VOD, the scene, which premiered at EvilAngel.com, is now available on all platforms. A trailer at EvilAngelVideo.com for “UNCUT” — the first movie from Mick Blue Productions — shows Mick and his luminous cast (featuring Paige Owens and cover girl Alina Lopez) in spontaneous, unscripted sexual passion.

Mick recalls the award-winning POV segment: “The backstory is that on that day we were supposed to shoot Emily’s first DP, but sadly, the scene got postponed last minute, and Emily needed a ride home from set.”

Laughs Emily, “We decided to go home and fuck anyways, which was a great idea. It was natural and hot and a spur of the moment thing.” She adds gratefully, “So happy I won an award for this scene. Mick and I have such great chemistry!”

“The car ride was such a turn-on,” says Mick, “that we just started there while driving. Don’t try this at home! We just grabbed the camera I had luckily in my glove box. Then once we got to the apartment, we continued what we started in the car. Emily is one of the best right now, and it shows in every second of this scene.”

“UNCUT” is the first volume of a new line. According to Mick, “All the fans out there will be able to see the true me with the hottest girls on the planet having just fun and amazing sex that includes a lot of POV, and also us just getting to it. It is the vision that everybody at home fantasizes about, and can become reality through my eyes. And that’s what happened in the scene with Emily. All the other girls, including Alina Lopez, Paige Owens and Aria Khaide, were amazing as well. They have their own stories of how our sex happened, which makes this new brand special.”

The award-winning “Emily Willis: Car BJ & POV Fucking!” can still be accessed at EvilAngel.com, and it’s now available on DVD and VOD as part of the debut release from Mick Blue Productions. The new movie’s uninhibited lust and raw intimacy, like the director’s unaltered anatomy, can aptly be called “UNCUT.”