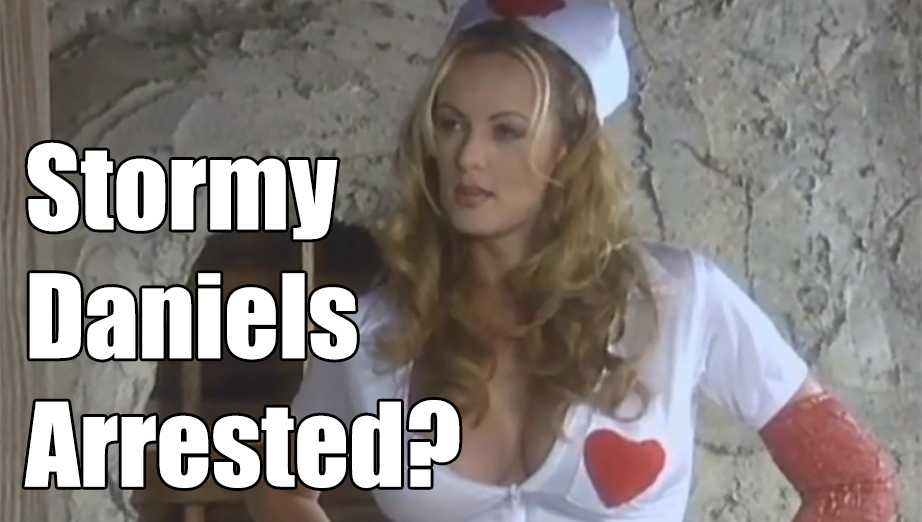 Big News just came crashing in from the Buckeye state early this morning as reports of Stormy Daniels arrest came in. This bombshell of a story revolves around Stormy’s stage act (the very one she’s been performing all over the nation) and that’s the part of the story that’s so unbelievable. This might not be news for you sad, sad folks in Ohio, but apparently if a stripper touches a patron while on stage, this act violates state law. WOW!

By early this morning, Stormy Daniels (Stephanie Clifford) is facing three misdemeanor counts of illegally touching a patron wile on stage at an Ohio strip club. This busty beauty isn’t spending much time behind bars because she had already posted bail and released as of this morning. Daniel’s attorney, Michael Avenatti has already tweeted that she plans to plead not guilty to all thee counts.

My client @StormyDaniels will issue a plea of “Not Guilty” to the three misdemeanor charges.

Avenatti continues on Twitter stating that the arrest was nothing more than, “a setup & politically motivated. It reeks of desperation.”  But is Stormy’s arrest part of some conspiracy or the act of politically motivated officers? We’re still not sure. We can say the whole ordeal is ridiculous and based on a hilariously outdated law…

The events unfolded exactly how you might imagine. During her performance, Stromy was getting touchy with some female patrons (this is getting good). Boobs and butts were touched and it sounds like there was even a good ol’ session of motor boating. This all falls under standard pervs row etiquette in our opinion. This is apparently when officers moved in for the big sting.

Before we dive too deep down the conspiracy rabbit hole,  let’s backtrack for a moment. When we take a closer look at Ohio law, employees that are regularly nude or seminude are prohibited from touching patrons on the premises of a sexually oriented business unless that person is a family member. Wait, what!?!

This is one of those things that make you go “EEEEWWWW”. Can you imagine law makers in Ohio debating the legitimacy of this complete farce only to amend it to say, “oh you can touch family members all you want… while naked!”. Good on ya’ Ohio.. you’ve found another reason never to visit your state.

So in the end, who is hurt the most in this sordid tale? Stormy for having to endure all this, The American people for loosing a grip on basic liberties, or the people of Columbus, Ohio who are now out a performance? YOU decide!

If you live in Ohio, contact legislators or your local representative. Do you really want to live in a place that discourages ladies from touching each others boobs? This is all about art, expression, freedom and the American Way! Stand up and do your part or this is how democracy ends.

UPDATE:  In a stunning yet very logical turn of events, the charges against Stormy have apparently been dismissed! Maybe there’s still hope after all. Okay Ohio… we might just give you another chance.

I am pleased to report that the charges against my client @stormydaniels have been dismissed in their entirety (below motion was just granted). I want to thank Joe Gibson & his colleagues at the prosecutors ofc for their professionalism starting with our first call early this am. pic.twitter.com/xHPSWsyqM2

Leave a comment and help show your support for Stormy Daniels, or keep this conversation going on Twitter @worldsbestporn