Tales From The Pornside:  The Story of John Curtis Holmes 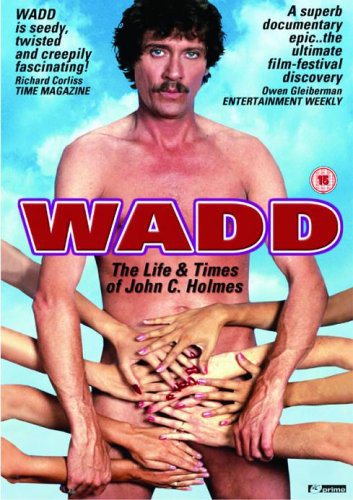 Recently we’ve decided to include a monthly installment of the stranger side to porn, which in my opinion has nothing to do with the “act” itself.  It surrounds more the infamous and mysterious lives behind the camera.  Mysterious deaths, conduct and infamous episodes of sanity lost.  This first episode to the series will surround one of the most infamous figures in the adult industry, who just seemed to be in the wrong place at the wrong time….  Or was he?  Please continue reading, and we’ll dig deep (approx. 13 inches deep) to seek out the truth behind one of porn’s legends.

There was an old story that went like this: During the making of Deep Throat, John Holmes came to the casting call, the director said, “this guy will never make it.  He’s not good looking, and he’s skinny to boot.”  John said back, “I think you’ll reconsider.”  And he whipped out his cock and threw it on the table.  The rest….as they say, is history.

This is the story of “Mr. Johnny Wadd”, John C. Holmes and “The Wonderland Murders”.
We’ll skip through the beginning as his start in the adult industry was quite obvious.  He was being photographed in print magazines, and someone suggested to him he should do film, since his cock was huge.  In other words, this beginning was in fact the means to his end.

Most people that talk about knowing John, feel they didn’t really know John at all.  He was a heavy drug addict that could have his lights turned off and back on in his head in a quick second, and through that change, was easily swayed into another character or person.  Many believed he had a split personality or multiple personalities that took over his state of being.
In a 1981 documentary on John Holmes, it claimed he had sex with over 14,000 women.  (That is possibly on par with all the members of KISS combined.)  Though in fact the number had been invented by Holmes himself to help him save his waning image in the industry.  But the relatively modest number of 3,000 was actually later calculated by a porn historian who sat down and physically did the math.  This also included at least one homosexual feature film, “The Private Pleasures of John C. Holmes” in 1983.

Back in 1980, Holmes developed a close friendship with a drug dealer/nightclub owner Eddie Nash.  During this time, there was a group of heroine addicted, cocaine dealers aptly titled the “Wonderland Gang” that he was curiously close to as well.  They were so called for their hideout, a house that sat on Wonderland Avenue in the neighborhood of Laurel Canyon in Los Angeles.  This specific time period the Wonderland Gang was a feared, if not the most feared cocaine distributors in all of California due to their gang like mentalities and brazen tactics of ripping rival drug dealers off.  John Holmes worked for the gang, selling and delivering drugs (reminds me of those kid runners for mafia heads in the movies) for them.  Holmes couldn’t resist though, after stealing money off the gang in a few of these drug runs, he eventually got himself in too deep and on the wrong side of the notorious gang’s goodwill.  Allegedly in exchange for John’s life, he told gang leaders about a very large stash of drugs, money and jewelry Eddie Nash had in his house.  Holmes helped set up the robbery that was committed on the morning of June 29th, 1981.

Its knowledge that Holmes did not participate in the actual robbery, Eddie Nash always suspected that Holmes had a  role in the planning or the taking part-in the robbery, as all fingers seemed to point in his direction.  Holmes eventually did confess to his participation in the robbery, for threats on his and his family’s life, Nash exacted revenge against the Wonderland Gang.  In the early hours of July 1st, 1981, four of the gangs members were found bludgeoned to death in their Wonderland Ave. hideout; a fifth victim was left with brain damage and 9 fingers.  But this time, Holmes was present during what became known as “the four on the floor” murders, but it is still unclear whether or not he participated in the killings.  A veteran detective from the LAPD said to the L.A. Weekly that he had not seen “this much blood since the Manson murders known as Helter Skelter 12 years prior.”

(above: the faces of Charles Manson)

Holmes was questioned about the murders in 1981, but was released due to lack of evidence.  Holmes also refused to cooperate with the investigation, and after spending nearly 5 months on the run, he was eventually arrested in Florida on Dec. 4th, 1981.  After this ordeal, Holmes was inevitably charged personally with ALL FOUR MURDERS.  On June 26th, 1982 he was acquitted of all charges though, except for “contempt in court.”
There is a movie starring Val Kilmer as Johnnny Wadd himself, called “Wonderland” that depicts the gruesome revenge tale in as much depth as possible without actually really knowing what the hell happened that week.  They do their best to portray John Holmes exactly to the specifications as I’m sure  John would have wanted; a cool, long dicked Boogie Nights swinging, drug addict, porn star, rock and rolling, larger than life mother fucker that was not someone to be messed with.  Until he was found in the crossfires of Eddie Nash and the Wonderland Gang.  Afterall, if it were not for Holmes, these two sides would never have been introduced and nothing of this would have materialized into the twisted and tangled “Tales From The Pornside.”

Holmes served 100 days for contempt, and in November of 1982 he was released and almost immediately afterward, re-entered the adult entertainment industry.  (How about the nuts on this guy?)  However his nasty drug addiction continued.
In February 1986, Holmes tested positive for HIV in a second test after the first one resulted as negative.  Unaware of his test results, Paradise Visuals paid a substantial amount of money to have Holmes fly to Italy and take part in two films for the porn company.  The eerie titled films post HIV positive test specifically were called: The Devil in Mr. Holmes, and The Rise and Fall of the Roman Empress.  (Weird, I know…)
Holmes, unable to come to terms with his illness, and failing health, came out and told critics he was ill with colon cancer, and went on to marry a third time to Laurie Rose, after confiding to her that he had in fact contracted AIDS.  It’s unknown how we contracted the disease, since he did not use needles, but was definitely around people who did.
During the final months of his life, he remained in care at the VA Hospital in Los Angeles before dying of AIDS-related complications in March of 1988, at the age of 43.  His body was cremated and yes, all his appendages including his big 13-inch, in tact.   (Although it’s important to note, his actual penis size was never recorded officially.  Reason being, John had a deep dark fear that when he would eventually die, his dong would be pickled and shown in a museum for amusement.  A full fledged narcissist, 13 inches is the rough estimate as told by many of his partners.)  What’s even more mind boggling is that it’s still uncontested that, Holmes actually never had on-screen sex with a full blown erection, so the truth behind his real penis size could not have been measured based on what the viewers witnessed in his films.

At the time of his death, John had only two possessions. His 10k ring worth 65 bucks and his memoirs, worth $35.00. His wife Laurie flogs the book on her website, as well as her dirty underwear, sealed in plastic, for freshness. Lovely.

(above: an interesting take on clearly inspired movie cover)

Funny but horrible story: John wanted to mess with some girl’s head, and laced her ice cream cone with LSD, and laxative. While she was tripping her brain out and pooing her guts out, he told her she was melting.