NL- Taylor is also going to be on the next cover of Xcitement/411 Magazine! ?

Taylor Stevens, the #1 Webcam Model in the World, to Take Her Talents to Chicago 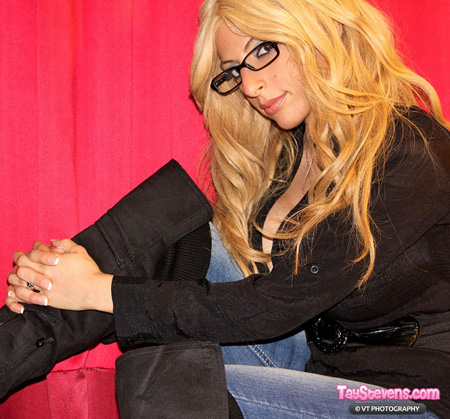 Cyberspace – Webcam goddess and performer Taylor Stevens is headed to Chicago to see friends, make new fans, and party at the Exxxotica Expo! Fans of the busty beauty and recent starlet of the 2012 NHL Finals can meet Taylor in Chicago from July 13th through July 15th at the Donald E. Stephens Convention Center, 5555 N. River Road. Rosemont, IL 60018. Go to http://taystevens.com for exclusive information as to what surprises Taylor has in store for her fans in Chicago.

Taylor made national and international headlines as the “Boobs Behind DeBoer” that were caught by the cameras of NBC Sports during the 2012 Stanley Cup Finals. “Enough hockey fans noticed to make Taylor Stevens and “Boobs Behind DeBoer” trending topics on Twitter during the Devils’ 3-1 victory over the Kings,”said Yahoo Sports. “Paul Bissonnette congratulated her for giving CBC “it’s biggest viewing audience in network history and half the people didn’t even notice the game.” Deadspin, Busted Coverage and Guyism all noted her attendance.”

Taylor Stevens was found in Los Angeles by TMZ, where she recorded this exclusive interview: http://www.tmz.com/2012/06/08/taylor-stevens-stanley-cup-devils-kings-breasts/

“I can’t wait to bring my Stanley Cups to Chicago! I know that city loves their Blackhawks!”