NL- So happy for my adorable bouncy friend Tay Stevens that she made the national news. She is such a GOOD spokes woman for the adult industry. She will be on an upcoming cover for Xcitement/411 Magazine and I can’t wait to do our interview! Luv you Tay!! 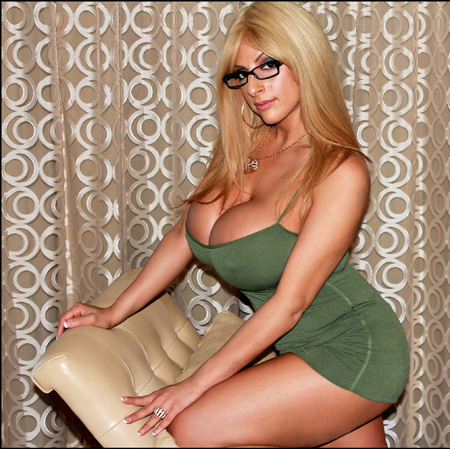 from yahoo sports
By Greg Wyshynski

With great goaltending and relatively well-behaved games, the 2012 Stanley Cup Final haven’t exactly been stimulating. As was obvious to anyone within sight of a television screen during Game 4, that’s no longer the case.
Seated behind Coach Peter DeBoer and the New Jersey Devils bench at Staples Center on Wednesday night was Taylor Stevens, an amply talented adult video actress whose assets were unmistakably on display in the front row near the glass.

She also helped create perhaps the greatest highlight of the Stanley Cup Playoffs, as DeBoer made a no-look pass:
Or as she tweeted during the game:
“Yup those are my #boobies against the glass #StanleyCupFinals #kings yaay if u see me on tv lemme know.”
Enough hockey fans noticed to make Taylor Stevens and “Boobs Behind DeBoer” trending topics on Twitter during the Devils’ 3-1 victory over the Kings. Paul Bissonnette congratulated her for giving CBC “it’s biggest viewing audience in network history and half the people didn’t even notice the game.” Deadspin, Busted Coverage and Guyism all noted her attendance.
On Thursday morning, Stevens discussed her sudden hockey fame and her affinity for the game — as a long-suffering Toronto Maple Leafs fan.

Stevens appeared on TSN 1050 in Toronto (audio here), explaining that “it’s getting a little bit crazy” for her thanks to the sudden notoriety.

How did she get those seats?
“I have a friend of mine that brought me the tickets, and it was a really, really nice because it’s been a rough year for me,” she said. “I wanted to be there, and I just happened to be right behind [DeBoer] at that opportune moment.”
Did she know she had become a Twitter sensation?
“I didn’t,” she said, “I don’t know if people really know but at those types of games it’s really hard to get Wi-Fi. I had a friend of mine text me to say, ‘I just saw you!’ and I was like, ‘that’s cool.’ I really had no idea until I had gone out, got a few emails and then after the game it just blew up.”

Did she offer DeBoer anything during the game? You know, like advice?
“No, I really wanted the Kings to win last night, so it was kind of crappy,” she said. “I still think they’re going to come back to win it.”
As far as her hockey fandom, she told station she “bleeds blue and white, unfortunately” as a Toronto native.
“I’m really sad. I don’t like the way they’re playing. I think the coaches know and the organization knows that the fans will fill seats. I just think we need to get some younger players in there, and work really, really hard. This year they had a good showing and then it was like UGH,” she said.
(Ed. Note: Fire. Brian. Burke. Hire. Taylor. Stevens.)
The aforementioned “tough year” for Stevens: She battled non-Hodgkin’s Lymphoma last year, and has gone through radiation therapy. “I still try to take life and enjoy all the moments that I can. That’s why I love going to sporting events. I try to live every day of my life to the fullest,” said Stevens.

We speak for a good number of hockey fans when we say Game 4 was the fullest experience we’ve had in the Final, thanks to you, ma’am.
With that, Taylor Stevens becomes the ultimate symbol of the 2012 Stanley Cup Playoffs. Last year’s postseason was fun and unpredictable and uninhibited … you know, like a Canucks fan who lifts her top at the penalty box glass during the conference finals.
This year’s playoffs? So much evident potential for greatness, yet to be revealed …