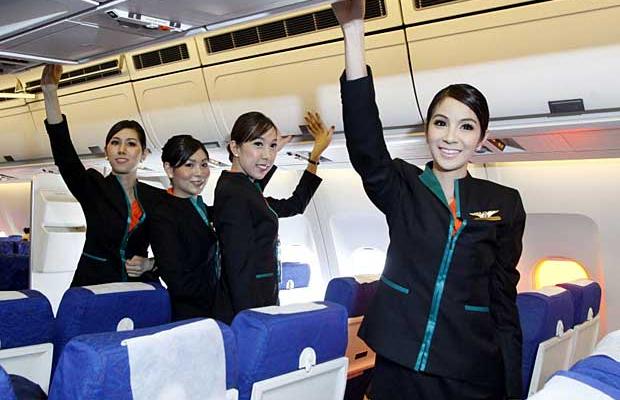 PC Air isn’t named for their new politically correct approach to international travel with a transsexual twist. The airline gets its name from its president Peter Chan, who by all accounts, was born a man and remains one so far in his life. As Chan explained in an interview published online, he believes ladyboy flight attendants may have a special advantage over their male or female flight attendant counterparts. “They might provide better services because they understand both males and females” said Chan. “And they’re well trained according to the aviation standard” he added to make the point that choosing to employ shemale stewardesses is more than just a gimmick for his air carrier long term.

PC Air is doing a tremendous service for transsexuals everywhere by elevating the discussion of pre-op and post-op employment to include the airline industry in such a public setting. Rather than limiting highly skilled, personable, well-trained individuals to back room tasks and occupations outside the public spotlight, PC Air is allowing every man, woman or transsexual to aim high and achieve whatever their merits might allow.

That fact is especially obvious to the newly hired shemale flight crew participants. Kkatoey flight crew member Tanyarat Jirapatpakorn is a 22 year old beauty who looked simply amazing in a navy blue uniform, flying from Bangkok to Surat Thani during the maiden voyage of PC Air last Thursday. “This is the beginning of the acceptance of transsexuals in Thailand, giving the opportunity for us to work in various fields”Tanyarat told reporters who eagerly greeted the flight as it landed. “Maybe in the future we can get any job that transsexuals never did before, such as police, soldiers or even pilots.”