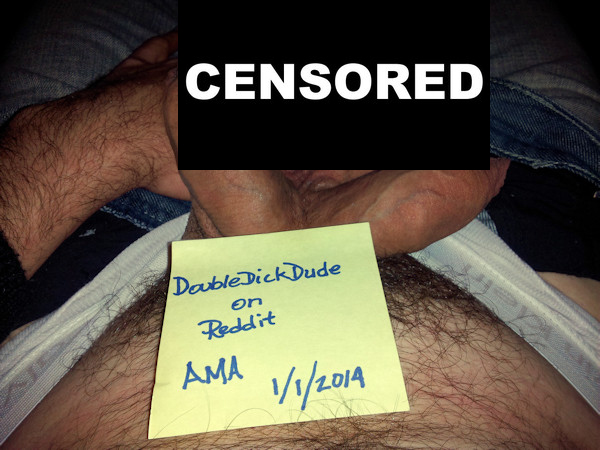 So there is a real man that was born with two fully functioning penises. Naturally, he decided to share his unique and coveted condition on one of the Internet’s biggest social media sites – Reddit. Forgive my lack of writing finesse, but this is some major crazy shit.Here’s a few interesting answers from his IAmA:

Did you have any nicknames in Highschool?

If you don’t mind me asking, what was your singular best sexual experience so far?

Two dudes in my ass at the same time, with each dick in a different girl who were riding me, pussy to pussy, while a guy and girl stood over me and let me eat/lick/suck on them while they fucked.

Are there any possible complications you have to watch for?

So tell me, what’s it like having a boyfriend and a girlfriend at the same time? Any awkwardness between the three of you?

Actually no awkwardness. They were a couple before they mutually started dating me. She is straight, and he is bisexual and discovered he was when after four months of them both knowing me, they found out about my cocks. It clicked and we’ve been together since.

How do women react when they find out?

Varies from girl to girl. Some have been like WOW. some have been like THAT’S FAKE! some have freaked out like, called me names. Most are pretty curious, but i don’t have casual sex anymore, i stopped a few years back. Didn’t like the empty feeling inside after a 1 night stand. did a lot of those in my late teens. A LOT of them. but for the most part, girls were nervous and some changed their mind at the last minute. dudes NEVER change their mind, they always want it even if they’re freaked out a little. lol

Yes I did, a few years ago. But decided against it. its one thing to be unique its another thing to be a novelty. i’d only be popular for so long and then i’d just be another blip in the hiccup of the porn business. the pay is shit from what ive seen and I don’t need money, I’m comfortable now. Besides, i can’t figure a value for my dignity. the only reason I let photos out is because i thought people might like to know, at least one guy with two normal dicks exists. all the others are pretty scary looking and i feel for them.

Do you shower at the Y or wait until you get home? How do you deal with the triple takes? I’m assuming you get stares and not just sneak-a-peaks.

I generally avoid public bathrooms and if I do use one i try to use the stall and not a wall urinal. There’ve been times where I’ve had to use the urinal and because i have one muscle that controls my piss, it lets the stream flow out both my dicks. so unless i pinch off one of them it comes out both and that doesn’t feel good. So I have to take both out to pee. Yeah I’ve gotten stares and even had a few guys at various times go HOLY SHIT.

Have you had urological studies done to see how your urethra drains into both penises and if you have any other duplication of internal organs(like your prostate)? Did they offer any sort of explanation as to the embryological cause of it?

Had one issue in my teens. the Y intersection where my urethra splits into two had some tension issues and was ballooning until the pressure was enough to force the urine up and out. So they did some minor surgery and used catheters to stretch and open up the Y some. no problems since. one prostate, but it’s bigger than average and it produces more seminal fluid than most, so at least once a week or so it has to be squeezed when i orgasm to release all the fluid. as for the how? i don’t know all the details, they told my mom that it could have been a lot worse and that i was rarer than boys who were on record. my mom refused a lot of tests and studies. she didn’t want me feeling like a freak growing up and told me i was special since i had two and everyone else had one. ?

Do you have a favorite?

Yes. the right one. The left one has a grudge against me for it too. lol

What is the worst thing about having two penises?

Worst? Briefs/underwear. I wear a small/medium in the waist (28-30″waist) so briefs that can hold it all together are too big, and briefs that fit everywhere else, i fall out of both sides.

How does it affect your sex life?

Dunno how to answer the sex life part. I’d have to have had only one at one point to know how having two effected it. Its great though, no complaints.

Do you know if this was a genetic mutation or a developmental abnormality? Also, does having both penises stimulated at the same time feel better than a single one being stimulated?

Its congenital and its from some crazy shit going on during development in the womb. my mom had some difficulties leading up to me being born and they noticed something was up with the ultrasound but not clearly till i came out with two dicks.

Stimulation of both at the same time feels good, but better when they are being sucked or are inside someone. jerking them at the same time just feels like jerking… too hard. i usually just jerk the right one.

What’s it like having both of them in the same hole?

Snug? ? Its nice. i like hearing the moaning from the person I’m squeezed inside of.

Can one be hard and the other not?

I honestly expected to see one teensy extra wiener when I clicked on the link yesterday but was surprised to see they were similar in size. Are you happy they are that way or would a lil one have been easier to deal with?

I like them the way they are. They’re more proportionate to each other than they look in photos. im limited to holding the camera myself. If one had been smaller, it’d be more difficult to deal with. So yeah I like that they’re the way they are.

Whats the best reaction from someone seeing your double dick?

Hunky muscle dude at a gym i was at. i was working out in my jock strap and shorts and the shorts were very baggy and loose and i fell out of my jock on either side and some how he noticed. he asked me in the locker room if he could please see them. i asked him “are you gay or something?” and he said “no, but i think i am now.” it was great.

So has there ever been that awkward moment when one person finishes the job before the other?

LOL I have, and I can, but usually just jerk the right one. The left one gets caught up in the mayhem sometimes, but either way he gets off too. lol

What type of reaction do you get from women you are with? Do you tend to warn them before hand ?

I’ve been in a serious relationship with a girl and a guy for a while now. I call it monogamous because we are exclusive. She enjoys it. The three girls before her enjoyed it. It’s sort of, made a few run screaming in the past. Usually the ones I get to know well before we date are cool with it. I don’t talk about it otherwise, like if i’m not going to have sex with you, you wont know i’ve got two dicks. lol

Have you ever been given a double fisted reach around? Sorry for the vulgarity, but the first thing that popped into my head when I saw the pictures the other day was “Next level reach around if you’re into dudes.”

LOL actually yeah, i’ve had a guy pounding into me reach around with both hands and ‘go skiing’ ?

Boy do I have a treat for you, have you heard about the girl with two vaginas?

Yeah i had and i’ve seen some pics. kind of hot but i’d end up destroying her. i pound pretty damn hard. she’d go from two tiny vagina holes to one big gaper. ?

And if your nosy curiosity got you like it got me and you need to read the rest of this double dicked wonder’s IAmA, just click on the bottom link.

And now for your moment of Zen: