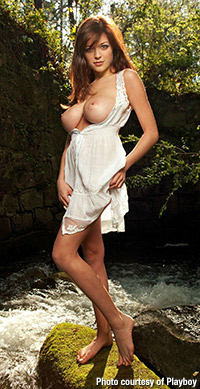 I have to confess, I’ve fallen for her. I’m infatuated. And as much as I like seeing her topless—I really do—I almost prefer her with her clothes on. Maybe I’m in the wrong part of the industry… but enough about my opinion!

She’s incredibly social with her fans, seems like a really genuine, down-to-earth person, funny, a total sweetheart, is stunningly beautiful, and has an incredible body.

Although most people on the Internet probably know her as that topless big boobed brunette-turned-redhead with a pretty smile, she isn’t some busty bimbo. Read on to see some of her answers to fan questions from her AMA on Reddit.

To my knowledge you’ve only done one fully nude video, […] was there anything special that prompted you to do it?

When I shot that video I had just started my modeling career. I’d been googling myself for weeks at that point (yeah I google myself. so what?) and I noticed I was getting very good feedback. The only negative thing I could see was that people were complaining that I wasn’t getting fully nude. Being the people pleaser that I am.. I decided to give it a shot and shoot a nude video. But, after it came out I got a lot of flak. Friends of mine, who were supportive of my topless modeling, were starting to worry that I was going ‘too far’.

I figured I would just stick with topless modeling as long as I still had fans that were okay with that.

how do your freinds/family think? people from your highschool/ hometown think of it? meeting guys? how will you tell your kid in the future?

Oh, and I worry all the time about what I’m going to tell my kid(s) in the future. I guess I just have to cross that bridge when I come to it.

You did a photo shoot as Wonder Woman; have you ever dreamed about being an actress[…]? Also, do you like superheroes? If yes, what’s your favourite male and female character?

I have always wanted to be an actress, but I freeze up when I’m put on the spot. So I doubt I’ll ever be an accomplished actress.

And yes, I do like super heroes. My favorites are Rogue and Thor. Rogue because she’s a redheaded southern girl, and Thor because he’s a fucking brute! ?

What qualities do you look for in a potential ….er….I guess ‘suitor’ would be a valid term to use here.[…]

This is going to sound so cliché, but I look for a sense of humor and someone who is easy going. I used to date guys that were ‘good-looking’, buff, popular, blah blah blah.. but I realized that they all kind of sucked. The people I really find attractive are the ones that can make me smile. It almost doesn’t matter how you look, because someone that makes me happy is already so sexy.

Would it be kosher if I saw you in a public place and just asked to see your boobs, chuckle, say “cool” and walk away?

If I was drinking, I would totally do it. No questions asked.

First, I think you’re AMAZING. An absolute goddess. Second, here’s the question: do you prefer solo shoots or shooting with other ladies? And if it’s the latter, who are your favorite models to work with?

Thank you so much ?

I prefer to shoot with other models. It’s hard to stand in one place, alone, and try to figure out what to do with yourself. When you shoot with other people it gives you someone to play off of. You can interact with them, and that’s always so much easier than doing it solo. That being said, I haven’t shot with many other models. Of the ones I’ve shot with so far though, I think my sister is the most fun ?

I have this weird hand fetish. I love hands!! Putting your hands on my body turns me into a puddle! So sometimes I have this fantasy of hands all over me. Kind of like a gang bang, but without the sex.

What are the best perks of your profession?

Hands down the biggest perk of my job is that I have a LOT of free time. I basically work four days a month. The only thing that sucks is that I don’t make enough money to support all this time I have off haha.

Have you ever been in love!? Have any regrets about any old flames!!? I know I do, I’ll be completely happy with life and then some old flames will pop into my head even years later, does this ever happen to you!?

I can honestly say that I’ve never been in love. I thought I was in love once, but it was really just infatuation. I think that may be why I’m a happy person. I have yet to be tainted by love and the horribly beautiful effects it has on people.

Hi Tessa, thought i would stop by and say greetings from Australia ? What would you say is your favourite alcoholic drink?

My favorite alcoholic drink is probably a nice cold beer. Nothing beats it.

I’m guessing based on how sociable you are that you’ve had a lot of platonic guy friends over the years… do you ever wonder if they want to “get acquainted” with your boobs? Would you care if they asked to “inspect” them?

You’re right. I’ve had mostly male friends throughout the years.

I don’t believe that men and women can be friends without one of them having some kind of ulterior motive. So it’s safe to say that 99% of my male friends would probably jump at the chance to ‘get acquainted’ with my boobs.

Does the guy’s size matter?

I can’t stress this enough… NO!!! Not at all! I’ve been with someone who would be considered ‘above average’, but the sex was awful! It was uncomfortable and afterwards I felt like my vagina had been hit by a train. The best I’ve ever had was with someone who was well below average.

If you weren’t modeling, what would you be doing for a living? As in, what would be your dream job/career?

If I never started modeling I would have probably would have gone into sales. Selling what? I have no idea. I’ve just always wanted to work with people. Plus, I think I can be pretty convincing..

Big boobs. Are they a blessing or not for you in person?

It’s hard to say. I’ll call it a double edge sword. I obviously get a lot of perks from them, but they get in the way a lot! It’s hard to sleep comfortably, I always have to wear a bra, It’s hard to shop, blah blah blah.

But even though they annoy me sometimes I still wouldn’t trade them for anything.

Are your nipples sensitive?

YES! Almost too sensitive. I know this may be a bummer, but I don’t like for my nipples to be played with for long because they always get sore.

How often do people confuse pin-up/glamour shots with pornography, and does that bother you?

It used to, but now it doesn’t bother me much. I used to confuse the two until I started working in the industry, so I can’t blame them.

How many times do you get hit on by guys on the street?

It happens a lot, but I realized it’s because I’m looking for it. I can go out, put on my sunglasses and head phones, and no one will talk to me.. but I usually go out, look people directly in the eye, and smile really big at them. Like I said, I go out looking to get hit on haha.

Have you ever thought about doing more risque modeling?

I’ve thought about it. I want to do some bondage type stuff. That would be so much fun for me. The photographer I work for has become kind of like an uncle to me though, and I’m somewhat nervous to ask him to shoot me all tied up and bound.

if you liked girls like, only like girls and you could choose a celebrity girlfriend, who would It be and why?

Although I don’t announce it, I’m bisexual. I’ve dated a few women, but it’s hard to meet new girls in L.A. BUT if I got to choose any celeb to be my girlfriend it would probably be Aubrey Plaza. I think we would play off each other well ?

Leanne Crow is a cartoon of a person ? Everything she does is exaggerated and theatrical. It’s so fun to just be around her craziness. Also, she’s one of the most genuine people I’ve ever met and I’m very lucky to call her my friend.

Can’t get enough Tessa Fowler? She is the moderator of her own subreddit, is on Twitter, Instagram, and Vine, and has a her own personal website tessafowler.com that you can join if you want to see more!

In the off chance that Tessa actually reads this, thanks for doing the AMA! Keep being yourself!