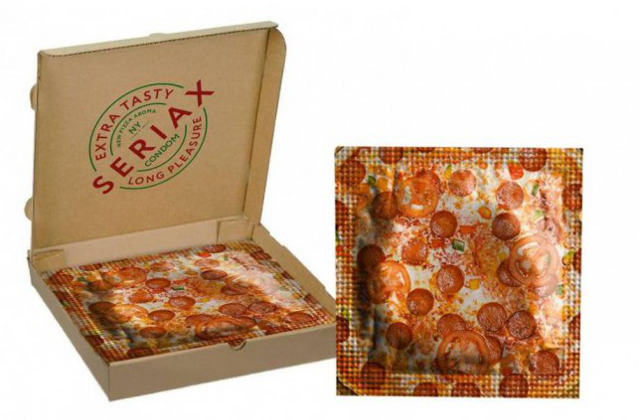 Delectable tastes and sex have always gone together like cheese and pepperoni and now the Pizza Condom take that idea to a whole new level. Is this going overboard when it comes flavored condoms?  You be the judge!

Imagine that you’re having sex and just as things are heating up a miniature pizza box makes an appearance! The contents of this box may not satisfy traditional appetites but the ingenious packaging for this flavored condom adds to the fun. That’s right inside this mini pizza box (that fits in the palm of your hand) is a little pizza scented and flavored condom.

As a lover of both pizza and sex is this the best thing that has ever happened to you? Or are you immediately disgusted? This novelty condom really does exist and has been remarkably popular but thank goodness our friends at Vice Munchies gave us the scoop on what the creator of the condom really thinks.

“I absolutely love this invention. I always wanted to find the perfect unison between my two favorite things.. sex and pizza and having a hot, steaming dick that smells like fresh pizza from Ritoli’s is everything I’ve planned on and I’m so happy that people are catching on to the concept. I hope that eventually we’ll be able to expand into different scents that really highlight the variety of toppings you can get on pizza. I’m also thinking of a sort of pizza sauce lube so lesbians and gays can get in on the action as well.”

Totally trolling, in fact the one whose thought process put this pizza condom into place isn’t so found of the idea. The Vice article quotes her as saying this:

“I never expected people to be so interested,” Marina said in a surprised tone, “but suddenly the pizza condom had become a mini sensation on the internet, and now a company has invested in it and they’re actually going to make the condoms.”

She doesn’t take it seriously but she does say that she thinks it will make a cute present. I think it’d be a great stocking “stuff-her”. Flavored condoms are crazy don’t forget about the Durex Pumpkin Spice condom that was making all the white girls go crazy last Autumn whether it was real… or not.

So will this mark a new beginning in the world of flavored condoms?  Are we about to see a whole new group of flavors that had been previously overlooked?  Only time will tell.