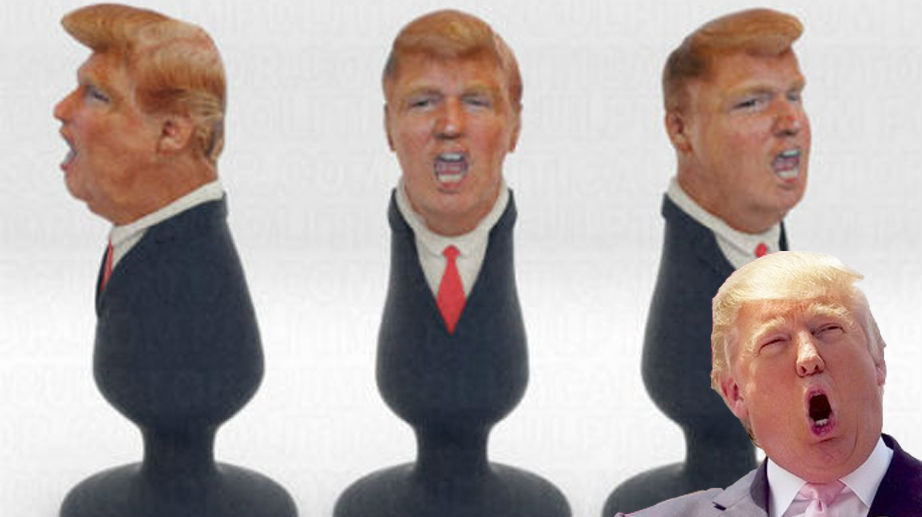 Hair Club for Men success story and GOP presidential hopeful Donald Trump has recently become the butt of many jokes and is on the receiving end of much vitriol due to his inability to figure out how to turn on his verbal filter. And in case you haven’t felt personally victimized by his insane, oddly south-of-the-border-themed hatred, you can feel exactly what it’s like to have your south of the border victimized with the all-new Donald Trump butt plug! The screaming likeness of our blond-for-too-long comboverlord measures up at about 3 ½ inches (we’ve heard it’s accurate!), and has a sturdy base so you can squeeze him in there nice and tight – perfect for a romantic evening, or even to have in all day at the office!

For the low, low price of $27.99, you can own a piece of paunchy, pale American history-in-the-making. His body may be Republican-soft in real life, but his sandstone sex toy likeness is as hard as his stance on immigration and porous as the space between his ears. Take the blatant racism and the stunningly accurate recreation of his supraorbital vein up your asshole until you, too, are filled with unbridled and unreasonable hatred for an otherwise wonderful culture and people. Stretch yourself (but not too wide, cuz that’s gay) with a little Trump in your rump and prepare to be fucked by his backwards politics, extreme views, and unsupported allegations that 20,000 people actually wanted to hear him speak in Phoenix.

If you’re looking to round out your collection and acclimate further to being assfucked by the GOP, consider picking up a Ted Cruz plug at the same time! You’re guaranteed to be shutting down governments and expressing extreme, hateful views on homosexuals, planned parenting, and women in no time at all! Having the set will grant unto you and your partner the ability to transform miraculously and formidably into hateful, horrifying monsters at your whim, at which time you will be free to pursue your lives as the terrifying hate-mongers you are.