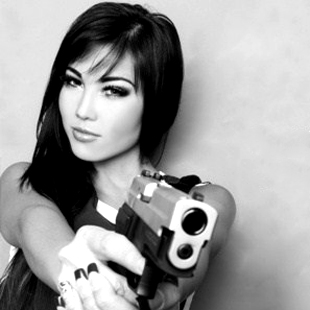 So you walk around checking out what’s good and finally when you settle on some neon-lit metal monstrosity that definitely won’t make you barf up your 8 dollar funnel cake, you strap in, grinning like an idiot. After all, excitement and exhilaration and nausea are just moments away. You get as comfortable as you can as the anticipation rises from the awkward depths of your asshole and surges up your spine like a strick 9 devil. Your eyes squeeze shut and your toes instinctively curl as you brace yourself for the ultimate in cheap thrills.

Okay, scrub that image. This is supposed to be a happy Friday post. My point is, these following performers are striving to create their own distinct brand and they do it by jumping on podcasts, writing blogs for awesome fringe zines like VICE, getting involved with fans in comic conventions and other gestures that aren’t designed to artificially woo fans, but are genuine extensions of their REAL personality.

She’s even got her own podcast with some dude here: http://dvdasa.com/

What Stoya has written for VICE magazine

Andy San Dimas makes this list mainly because her stage name makes reference to a high school and town in those zany “Bill and Ted” movies, which I fuckin’ adored as a kid. Okay, she might not have done cool shit like the above mentioned, but she is pretty damn sexy.