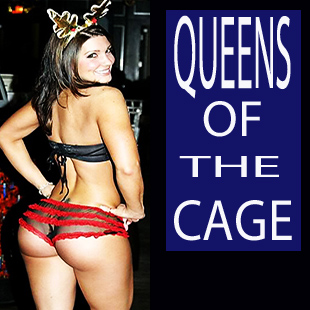 We thought about ring girls, but that would have been too easy. This blog is dedicated to the wild women fighters of mixed martial arts of which there were many. And the finals were hard to narrow down.

Yup. It was tough, but the #5 position was so strung with honorable mentions i had to go with a three way tie. Kyra Gracie doesn’t technically fight in mixed martial arts, but she comes from the loins of the Gracie bloodline, therefore she has been included.  She is the most accomplished black belt in Brazilian Jiu Jitsu for a female that is not competing in MMA.  But she obviously will one day, and that’s why she’s included! Go Brazil!

A lethal dose of three brunettes, sitting in the #5 position, check it out:

Lena is a total wrecking machine from the Ukraine. Beware!!! Looks can definitely be deceiving…

In 2007, Erin went on to become “Steel” on the remake of American Gladiators.  She dabbled off and on with the idea of retiring from the sports of boxing and mma, but never gave it up completely.  Each time she came back, she won by KO. That will definitely keep lingering in the psyche and keep you interested until it’s really time to hang it up.

Below: A little resemblance to Punky Brewster never hurt nobody.  But if you tell Erin,  she may just strangle you.

-Michelle is dope. She’s amazing. Quite possibly and easily could be 1st in this list.
Reason why not, is, it would almost have been too obvious.  If Tila Tequila got her own reality show, I have no idea why Michelle couldn’t do the same after her fighting career is over.  Big things for all these ladies!!!

-Rowdy Ronda has exploded onto the scene as the new women’s face of mixed martial arts. Having been on the cover of ESPN’s magazine the body issue, is a pretty huge deal. Also being undefeated in the cage also helps to her rising stardom. She is a bronze medalist at the 2008 Olympic games in Beijing China for Judo. She’s a total badass. Her finishing move is an iron grip armbar that could tear a limb right off, if her opponent doesn’t tap.

-Ms. Tate is ultra hot. Reason why she edged out Ronda is simply because she can market herself with all these pictures, as hot as can be, you would never think she has any time to train since she’s always in front of a camera, uploading shots of herself.  Yet she is so unassuming.  But she does train. She fights. And she wins.  She knows how to be sexy.  And she works it.  And for that we must salute her.

-Gina has officially reached Hollywood status. Above all, she’s now in movies, she was “Crush” on the remake of American Gladiators, and doesn’t need the fight game to pay the bills no more. She’s our girl. #1. Former face of women’s mixed martial arts, she was the first when the big wave of excitement came to watch these women fight. Gina proved that you don’t have to be a ring girl to make #1 in any of these lists. She’s our favorite, and nothing will change that.

We hope you enjoyed the top 5 (technically top 8)  hotties of women’s MMA!!! Gina had to be #1, she is bomb and you all know it!!!  We did exclusive scientific research on the brain (much too technical to explain) and heads literally exploded when Gina’s pictures came up. We reached unfathomable results.

Extremely late honorable mentions, with the best assets had to go to tiny little Felice “Lil Bulldog” Herrig.  As fierce in the cage as out.  Best ass in the sport of women’s  MMA.  (Except for Gina Carano’s of course!) But Felice you are a close 2nd my dear!!!!