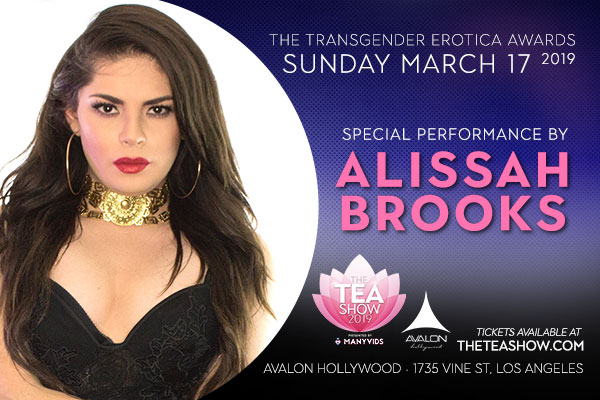 Transgender recording artist Alissah Brooks is slated to perform at the upcoming Transgender Erotica Awards (The TEAs) presented by ManyVids on March 17, 2019, at the Avalon in Hollywood, CA.

“We’re thrilled to have Alissah perform at our upcoming show next month,” said TEA Executive Producer, Kristel Penn. “As an event that celebrates the accomplishments of our trans adult community, it’s certainly not a requirement we feature a trans entertainer, but we do want to include trans people and allies as part of our show as much as possible. We want this to be a celebration of our community in every sense of the word.”

In addition to Brooks successful career as a recording artist, she is an activist who works with organizations like GLAAD to bring awareness to issues that face the transgender community. In 2016, she was presented with the “GA Voice Best Transgender Activist” Award. Visit her official website at AlissahBrooks.com.  Follow her on Twitter at @AlissahBrooks.