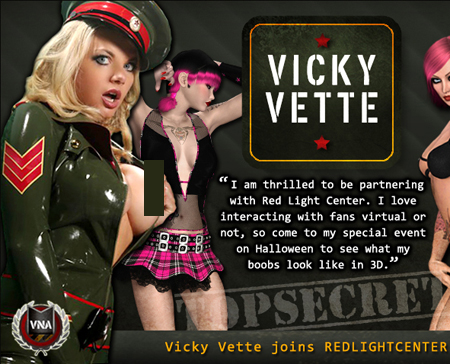 Adult superstar Vicky Vette (http://www.twitter.com/vickyvette & http://www.vickyathome.com) is proud to announce that she is diving into the world of massively multiplayer online games and joining forces as an official spokesperson for Red Light Center’s Adult Virtual World (www.redlightcenter.com).  Vicky Vette is the current XBIZ Webstar of the Year, Miss Freeones & Hall of Fame recipient from Nightmoves.  She was nominated by AVN this year for Best Solo Girl Website & named by XBIZ a Top Newsmaker in adult for 2011.  She is the 2nd most followed active adult star on twitter with over 355,000 followers.   Vette runs the popular VNA Network of Pornstar sites with stars such as Nikki Benz, Puma Swede, Julia Ann, Sara Jay & others.  Red Light Center recently received a 2010 Award from XBIZ for Innovative Web Company of the Year.    In Red Light Center, users create online social profiles as well as 3D avatars which interact inside the virtual environment, such as in clubs, café’s & strip joints. Users can interact with other users, chat, make friends & have virtual online sex. Vette and Red Light Center are kicking off the partnership with a special Twitter Fan Contest.

Fans are invited to tweet @VickyVette & @RedLightCenter, and also email [email protected] what fantasy they would want to do to Vette if they had the opportunity. The winner of the contest, as selected by Vette, will fulfill that fantasy at a special Red Light Center Halloween event to take place on October 31, 2012.

Vette will personally be hosting more weekly online virtual interactive sessions with members of Red Light Center in November. Fans are also invited to set up a profile in Red Light Center and try the virtual world for free. Details of the contest will be posted on Red Light Centers Facebook page: http://www.facebook.com/RedLightCenterVirtual

Vicky Vette is quoted as saying: “I am thrilled to be partnering with Red Light Center.  I downloaded the software and have been having virtual sex with random users for the fun of it after work. The virtual world is kinky. It allows the viewer to do whatever they wouldn’t dare in real life with complete 100% anonymity. You can be what you want, when you want.  I can’t wait to see what the fans have planned for me. I love interacting with fans, virtual or not, and can’t wait to see my boobs in 3D!”  Brian Shuster, CEO of Utherverse & Red Light Center, is quoted as saying: “Partnering with Vicky was a no brainer. She’s one of the better known adult stars in the business, is great with social networking & has an interactive online fan base. We are excited to be making a custom Vicky Vette virtual avatar with all the right curves. If you want to have sex with Vicky Vette online, now’s your chance to jump into our online community and interact with her.”

Vette is next appearing in the ‘real’ world with a number of the VNA Girls at the AEE/AVN Convention in Las Vegas at the Hard Rock Casino, January 17-19.