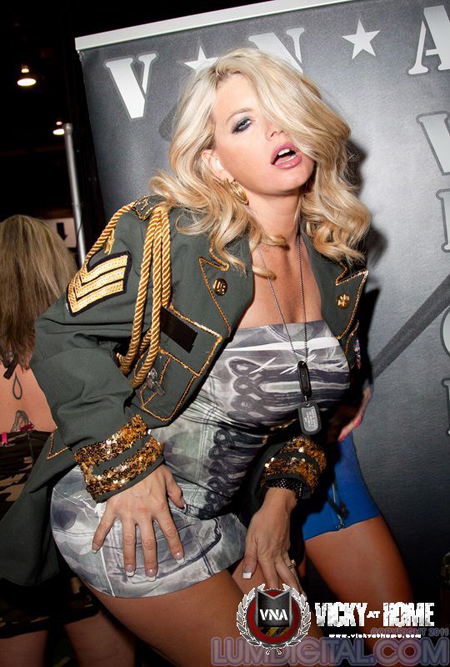 A tweet from Adult Star Vicky Vette (http://www.twitter.com/vickyvette) landed her on CNN and front page of http://www.FunnyorDie.com recently after one her raunchy tweets was mistakenly aired by CNN News during a story about the recent payroll tax crisis facing America.  As detailed in the Funny or Die piece, http://www.funnyordie.com/articles/7617bf0465/cnn-supports-you-retweeting-pornstars-getting-blown-as-thanks, CNN was examining the Whitehouse’s use of twitter hashtags to drive home the point that average Americans would miss the #40dollars in their paychecks if the payroll tax compromise was not reached.  Vette’s humorous tweet that if all of her followers gave her’#40dollars’ she would give them all oral sex was one of the most popular tweets on the subject and mistakenly aired by CNN to its’ viewers – evidently much to the joy of FunnyorDie who ran with the story for its the readers on the front page of its website for five days – 92% of whom thought it was funny.

Vicky Vette is quoted as saying: “You can’t plan stuff like that. I fool around with hash tags on twitter to keep it fun for followers.  To end up on CNN & FunnyorDie is pretty cool.  I’m just relieved that people who read the FunnyorDie piece thought it was funny too. It would have sucked if they had voted to ‘Die’.  I guess all my followers were in on the #40dollars joke… I have yet to get $40 bucks from anyone even though the payroll tax deal was reached. Let’s face it, the chances of me being on CNN unless I have sex with Charlie Sheen or run for governor are zero… so I’ll take it… he he. I’m just bummed my mother watches Fox News… she missed it.”