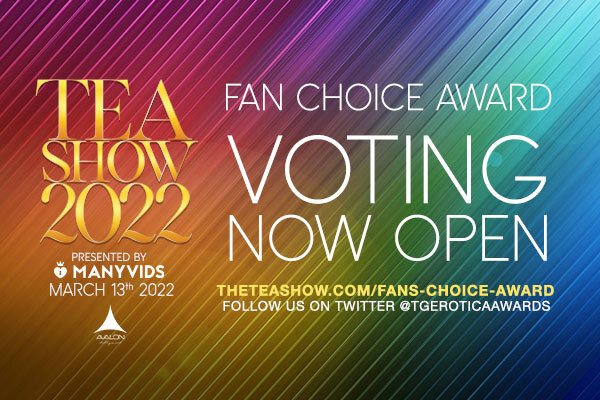 LOS ANGELES, CA – Voting has officially started for the 2022 TEA Fan Choice Award. The winner will be announced at the upcoming TEAs presented by ManyVids hosted by Domino Presley in Hollywood.

“This category is one of our most popular of the evening and it’s easy to see why,” explains TEA Executive Producer, Kristel Penn. “This award is voted on exclusively by fans of our genre versus a panel of judges, so we encourage performers to enlist their fans to show their support by voting directly.”

The voting period runs from January 28 – February 10, 2022. The eligibility period for consideration is for performers who appeared on a website or DVD release between January 1 – December 31, 2021. Individuals may only vote once and completely to be counted.

More information can be found at: https://www.theteashow.com/fans-choice-award/

The 2022 TEAs presented ManyVids will be held in Hollywood on March 13, 2022. The official Pre-Party will be held on March 11, 2022, at the Avalon’s connecting property, the Bardot. More information can be found at theTEAShow.com or on Twitter at @TGEroticaAwards.