More specifically, inactivity lowers sperm count. We all know inactivity is the devil, and will eventually put you 6 feet under. But new research has suggested something shitty will happen along your path to the grave if you don’t make a lifestyle change – like it or not, watching a screen 10+ hours a day will cause your little swimmers to DIMINISH! 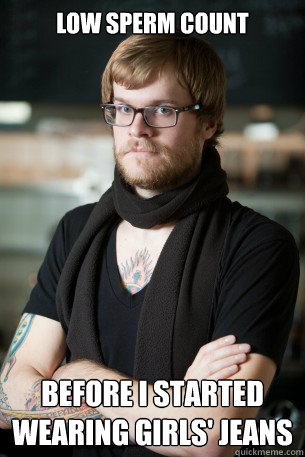 Low sperm counts are linked to infertility, and can even bring about larger problems such as testicular cancer, prostate cancer and other cardiovascular issues later in life. A study at the University of Rochester in New York recently asked 189 college students to fill out a form describing their stress levels, diet, physical activity etc. Each man provided a semen sample, and it’s found that men that exercised 15+ hours a week have 73% higher sperm counts than men who exercised less than 5 hours a week. Men that watched 20+ hours of TV a week had a 44% decrease in little swimmers than those who watched little to none.

There’s a couple theories as to why couch potatoes have a lower sperm count, one of them being questionable:

It has been stated before that the scrotum needs to be slightly cooler than normal body temperature for optimum sperm production.

ONE THING TO NOTE: Though the sperm counts that inactive males are experiencing can be troubling, let it be known that the quality of the remaining sperm is typically still top notch! So, get off your ass if you want to double the amounts of baby batter you create!

All this information is verified and reported on by national geographic, and the stats were released only yesterday believe it or not! The full report can be found here. Also, if you’re interested to hear about how a man produces 1500 sperm a SECOND! – Then check out another article by National Geographic!