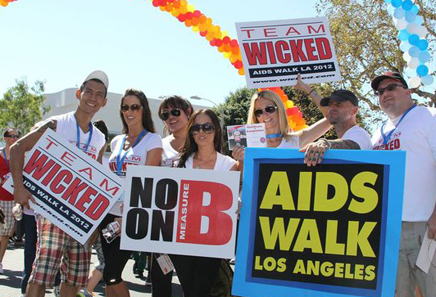 jessica drake holds up Team Wicked’s certificate of completion at the 2012 AIDS Walk Los Angeles. jessica drake with one of the team’s “No on Measure B” signs.

Team Wicked’s involvement with the cause was spearheaded by Wicked Pictures contract star and emerging sexual wellness authority jessica drake, who has participated in the annual walkathon for several years. For 2012, she expanded her involvement in the event through the formation of Team Wicked, an alliance that included not only members of Wicked Pictures but a diverse cross-selection of adult and mainstream entertainment professionals. In solidarity with their friends in the adult industry, members of Team Wicked wore special “No on Measure B” T-shirts to voice their opposition to proposed legislation that would mandate the use of condoms and other products in adult films. 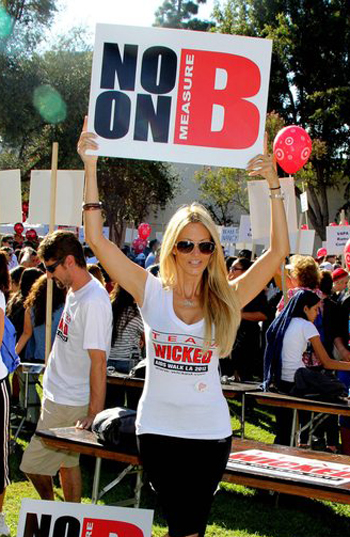 For Ms. drake, who celebrated her birthday with Team Wicked at The Abbey in West Hollywood after crossing the finish line, Sunday’s events will always hold a special significance. “There is only one word that sums up how I feel about this year’s AIDS Walk LA: Grateful.” Expanding on her team’s accomplishments she enthuses, “I’m so grateful to everyone who donated money or helped further our message, and I’m especially grateful to every member of Team Wicked that came out to walk with me, celebrate my birthday and support such a great cause! And I want to give special thanks to Wicked Pictures for their support and encouragement.”

For more, please visit www.wicked.com. About AIDS Walk LA: Since 1985, AIDS Walk Los Angeles has raised $69 million for HIV programs and services in Los Angeles County, and has grown into the largest AIDS fundraising event in California. The AIDS walk movement has raised more than a half-billion dollars nationwide. j