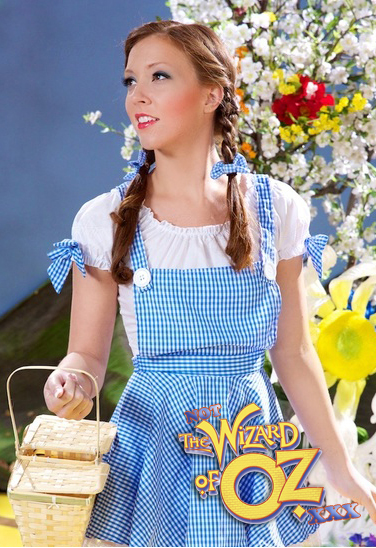 The sprawling movie set resembled a big time Hollywood sound stage as turbo-prop fans were trucked in to create the wind storm that would signal the arrival of the deadly twister that transported Dorothy on her ‘Technicolor’ journey to Oz.  Adult legend Nina Hartley in her role as Auntie Em was battered by strong winds as she ran through the farm shouting ‘Dorothy….Dorothy’ with the twister fast approaching.  Into the storm shelter trampled Uncle Henry and the farmhands giving another big signal that this was no ordinary adult movie.

“You will be blown away like a Kansas tornado,” predicted the movie’s director Will Ryder who meticulously planned out every detail of this complex production including the five musical numbers that feature key cast members singing original songs written specifically for the movie.

“This is my favorite project of my career,” remarked Maddy O’Reilly following the shoot as she reflected on the unique nature of the project.

Dorothy’s amazing journey turns sexual even before the twister touches down and the flow of intense color, sexuality, song and dance grows with each step down the Yellow Prick Road but the Wicked Witch is always lurking causing suspense and fright.

“I am so proud of my cast and crew because they accomplished the impossible in bringing this movie to life,” Ryder remarked.

Anikka Al bright was bewitchingly beautiful as Glinda the Good Witch, Brandy Aniston transformed into a very scary Wicked Witch. The Scarecrow, Tin Man and the Lion were played respectively by Mack Turner, Dick Chibbles and James Bartholet and were so believable you’d think they were the original actors from yesteryear.  Joining them on the magical journey were munchkin Lil Stella Marie, Seth Gamble, Eric Swiss, Kurt Lockwood, Gary Lee, Eric John, and brand new sex-kitten Al exis Adams who sizzled naked in the cornfield.

“There were a lot of hurdles to overcome but we were finally able to create the movie I dreamed about,” Ryder an AVN Director of the Year winner said.

“I have never been a part of anything as special as this and I guarantee you that each person in the cast and every crew felt the same way.”